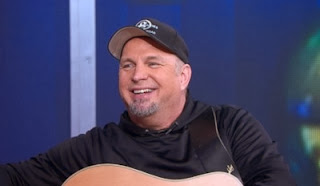 Country's biggest Christmas wish just came true. Yes, Garth Brooks is getting country fans amped up with today's tour announcements and a brand new single release from his current box set. "You know what, since it's you and since we've had a history forever, let's announce it," Brooks told Good Morning America anchor Robin Roberts this morning. "We're going on a world tour in 2014. I can't believe I just did that but you are a doll." Later in the morning on "The Talk", Brooks talked about plans for a three-year world tour that will make everything else he's ever done "look small." Regarding the new single that is heading to country radio, the song is "The Call" which features Garth's wife, country power house vocalist Trisha Yearwood. As of now, the tour details and single promotion details have not been revealed however Garth has enlisted the help of Sharla McCoy to produce this week's radio tour announcement. Brooks retired from the road in 2000. We welcome him back with open arms and I can guarantee sold out shows every night!

Watch the announcement and interview here
Posted by LovinLyrics at 8:36 PM