Album NEVER GIVE IN Available Now 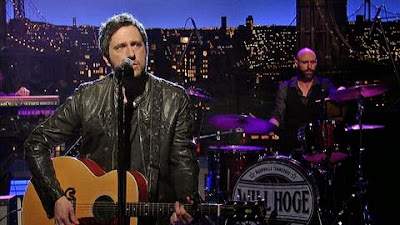 Nashville, TN (January 13, 2014) – Last Thursday (1/9), Will Hoge performed his top-selling hit single “Strong” on CBS’ The Late Show with David Letterman. With over 165,000 copies sold to date, the song is on the verge of breaking Top 40 at Country radio and quickly garnered national attention for serving as the Chevy Silverado campaign anthem. Watch at 40:00 here. The Grammy-nominated singer-songwriter is also holding strong on the Americana music charts with his latest album NEVER GIVE IN (Cumberland Recordings/Thirty Tigers) launching into the Top 5. The project which features “Strong” is available everywhere now.

NEVER GIVE IN is a life motto for the Nashville native who catapulted into the national spotlight in 2012. Spending the early part of the year supporting Dierks Bentley's arena headlining tour, Hoge was introduced to his first dose of mainstream country. The release of the Eli Young Band Platinum smash “Even If It Breaks Your Heart,” which he co-wrote with Eric Paslay, garnered an enormous amount of buzz at Country radio, earning Hoge nominations for the 2013 GRAMMY Country Song of the Year, 2013 ACM Song of the Year and 2012 CMA Song of the Year. While raising Hoge's profile as a hit songwriter, the song also introduced his music and records to the Country music audience; a decade removed from major label release on Atlantic Records, CAROUSEL.
Posted by LovinLyrics at 12:51 PM