"Getting To Know Austin Webb" Now Available on YouTube 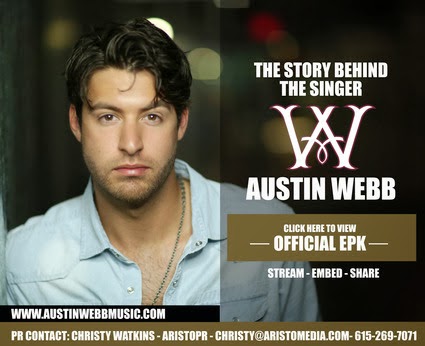 (Nashville, Tenn. – Feb. 4, 2014) - Streamsound recording artist Austin Webb has released an EPK titled “Getting to Know Austin Webb.” In the video, which is currently available on YouTube, Webb discusses his musical journey as a country music artist thus far.

The EPK, filmed by Glenn Sweitzer of Fresh Films, is available here. In the video, Webb shares stories of being discovered in Nashville, his Grand Ole Opry debut, his current single “Slip On By,” and more.

“Slip On By” is currently at Country radio and recently scored Webb his debut Top 40 single.  The song is a sentimental ballad that stresses the value of time and not living in regret. This harmonious tune plucks on the heartstrings of growing older and emphasizes the importance of not letting time “slip on by.”

In addition to the release of the EPK, other available Austin Webb video clips are: an official music video for “Slip On By,” a behind-the-scenes clip from the set of the music video, and a clip documenting Webb’s Grand Ole Opry debut appearance.

The Greenville, S.C. native’s music straddles the line between the two genres he grew up listening to most: Country and Soul.  Citing influences like Joe Cocker, Otis Redding, Bill Withers, Guy Clark, Bob Dylan and Townes Van Zandt.  For more information on Austin Webb, visit www.AustinWebbMusic.com and follow him on Twitter and Facebook.

Posted by LovinLyrics at 1:24 PM