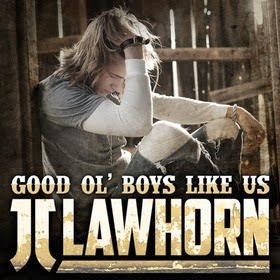 NASHVILLE, TN (February 11, 2014) – Average Joes Entertainment’s  JJ Lawhorn is releasing his second single, “Good Ol’ Boys Like Us,” from his album, “Original Good Ol’ Boy” which debuted in the Top 20 on Billboard’s Country Album chart. Written by JJ Lawhorn and produced by Jeremy Stover, “Good Ol’ Boys Like Us” is an endearing, real-life song that stresses the value of never-ending friendships.  The song will be available on iTunes February 18 and will impact country radio later this month, followed by the release of the video.  Listen to the song here.

"Good Ol' Boys Like Us" is a true story inspired by the passing of friend that devastated my hometown community a few years back,” commented Lawhorn. “While it has always been special to me, the tune took on a new meaning after my best friend and former drummer died in a tragic motorcycle accident two months ago. There isn't another song that I've ever written that is closer to my heart.  Its message is one of hope; a reminder that we are never alone even after our loved ones are gone.”

Look for the video “Good Ol’ Boys Like Us” to be released soon.

Connect online with JJ at www.jjlawhorn.com, on Twitter at @JJLawhornMusic and on Facebook.
Posted by LovinLyrics at 12:13 PM