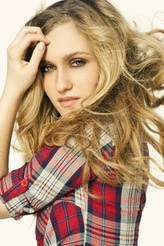 In the article, Sajak advises, “confidence is the key to staying focused and not comparing yourself to other people.”

Sajak’s current single, “Wild Boy,” on Back East/ GMV Nashville, is currently charted on the national secondary Music Row chart. “Wild Boy,” produced by Josh Leo (Martina McBride, Love & Theft), is an upbeat, rhythmic salute to a rebellious boy with an intoxicating wild side. A video for the single was shot at ACME Studios in Brooklyn and was exclusively premiered by Teen Vogue. The official “Wild Boy” music video can be viewed here.

Sajak is currently back in the studio with producer Josh Leo putting the finishing touches on her debut six-pack EP which is set for an early summer release. She currently has five singles available on iTunes, and two music videos on YouTube.

In addition to her single “Wild Boy,” Sajak has released a special track called “Live Out Loud,” a song inspired by a teen cancer patient. The song is available on iTunes with proceeds going to cancer research at Johns Hopkins Hospital. A lyric video was created for the live for the moment ballad, which can be viewed here. Maggie Sajak’s first single, “First Kiss,” was released when she was 16-years old. The song was featured in two Country Music Television productions and the Hallmark Movie Channel flick, “Our Wild Hearts.” Now 18, Sajak is writing and recording music in Nashville for a full-length album, which is set for release in the Spring of 2014. “Wild Boy” was released through Back East/ GMV Nashville and is currently available on iTunes here.