MUSIC MONDAY: TIME FOR FANS TO BRAG ON THEIR FAVORITE ARTISTS 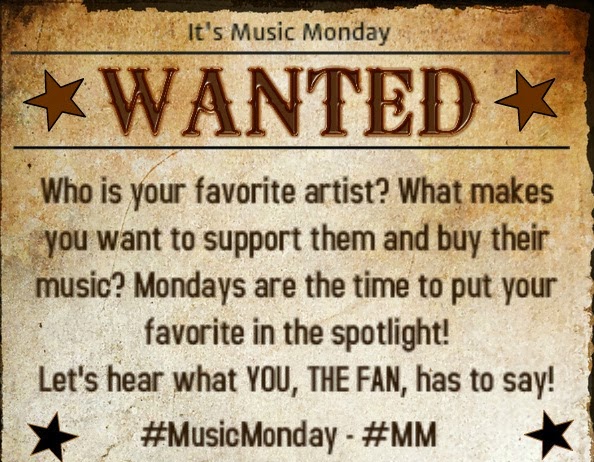 Every Monday is known as "Music Monday" in the world of social media.You may see it on Twitter listed as #MusicMonday or #MM. It's the day where music fans showcase, show appreciation and tell others about their favorite artists. Today, we thought we'd keep it all about new artists, those you may not have heard of. Below are some of the responses we got from fans today telling us who their favorite artists are, what makes the spend their hard earned money on their music and if they've had any personal interaction with the artist that made an impression on them. We'd like to share those with you and maybe some of these artists will become one of your favorites too.

@LisaDossett1  - "My favorite unknown artist is @samhatmaker!! Love her song "Southern Soul" that just came out on iTunes!! #MM"

Susie Francoeur - "Gary Quinn is simply amazing and will be playing the Country 2 Country concerts in the UK. He is available on iTunes too!"

Kristine Eicher - "I am sure I will and can list more but I went to a show last week for Jamie Lynn Spears and I was pretty impressed with her talent. Even though I have a few favorites but theres alot of new talent that I am looking forward to seeing,whether it is for the first time and there's some I have just seen for the first time and I will list a few of those: Tyler Barham, Austin Webb, Jackie Lee, Justin Adams, Adam James, Justin Rivers ... P.S. I am going to add one more to this list and only seen him play a few times but would like to see this guy be seen and heard more, Erik Dylan."

Kim Vanderhofe - "Of course James Wesley! He has an incredible voice, great stage presence, he is genuine, a down -to- earth real person. Check him out ! Here is one of his beautiful songs : http://www.youtube.com/watch?v=x2UwHU6apZs."

Brad Miller -"Well I wanna point out that Cassadee Pope was in an awesome band before country music called Hey Monday.  I was playing PlayStation 2 Major League Baseball 2009 and Hey Monday was on it. I looked it up and did some digging, found out it was Cassadee, man is it awesome! As far as country, I will have to say CoriLynn from Texas is awesome, you can find on YouTube as well!  Little friend of mine from twitter Lily Nelsen, Elizabeth South is good to she even has a duet with Vince Gill! She a school teacher from Durham NC. I can't forget my little sister in Christ, Mary Sarah. She is awesome and is a sweetheart as well, find her on twitter and everywhere lol! Jaceleigh,  a 14 year old female singing a song called "I'm Just Angry" turned out remarkable. I also have to plug "The Oar" by myself, Bradley Miller, that has been #1 for 23 days on IAC Music Charts, #1 out of 100,000 in every genre that is! Check it out http://www.iacmusic.com/genre_chart.aspx."

Linda Irving - "My #MusicMonday is all about Matthew Huff, love his music. He has a new release 'A Little Bit of Crown' out early March and a new album out in April. I had the pleasure of seeing Matthew live in the UK last November and he is an incredible singer/songwriter who is definitely want to watch in the world of country music ... http://www.youtube.com/watch?v=DnUV7vu0L24."

Posted by LovinLyrics at 9:52 PM