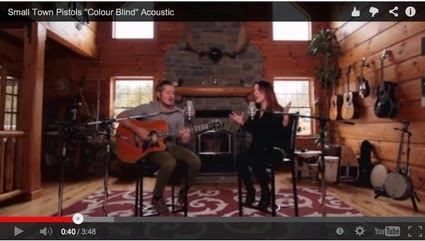 Former members of the chart-topping trio The Wilkinsons, Amanda and Tyler Wilkinson recently made their stateside debut as Small Town Pistols and released new music from their self-titled debut album. The duo’s first single and video, “Colour Blind,” is now available on iTunes. The video currently has over 65,000 YouTube views and is available for streaming on CMT.com and GACtv.com.

The duo co-wrote the song with Joey Moi, who is credited for producing the track (“Colour Blind”) and other hits by Florida Georgia Line (“Cruise,” “Get Your Shine On” and “Round Here”) and Jake Owen (“Barefoot Blue Jean Night,” “Days of Gold”).

To view the official video for “Colour Blind,” click here. To learn more about the duo, view their EPK here.

“Colour Blind,” which serves as a lyrical reminder to see everyone’s unique colors and to enjoy all of life, is the first stateside single off their current album. Following the success of their debut, self-titled project in Canada, Amanda and Tyler were anxious to bring their music back to Nashville.

Small Town Pistols were recently nominated for a JUNO Award in the Best Country Album of the Year category. The JUNO Awards, held March 30 in Winnipeg, are similar to the American GRAMMY’S.

As teenagers, Amanda and Tyler launched their careers as The Wilkinsons, a band made up of themselves and their father, Steve Wilkinson. Together, they produced two consecutive stateside Top 20 singles, “26 Cents” and “Fly (The Angel Song),” and achieved success at Country radio that led to the success of their first album, Nothing But Love, which reached No. 16 on theBillboard Top Country Albums charts in 1998. That same year, the group garnered nominations for the Country Music Association's Horizon Award and Vocal Group of the Year Award; the Academy of Country Music’s Single of the Year Award; and two GRAMMY Awards (both for Best Country Performance by a Duo or Group).

A few years later, with nine Canadian Country Music Awards, a Juno award, a hit reality television series under their belts, Tyler and Amanda both briefly set out to pursue solo careers, but it wasn't. http://theboot.com/small-town-pistols-colour-blind-acoustic-exclusive-video/’t long until they would collaborate again and form Small Town Pistols.

The duo’s debut full-length album is already available through iTunes and other digital retailers. The album's average iTunes consumer rating is currently 5 out 5 stars.
Posted by LovinLyrics at 7:21 PM