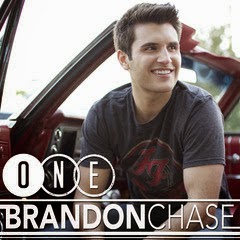 PERSONAL NOTE: Lovin' Lyrics started promoting Brandon even before you knew him on NBC's "The Voice". We fell in love with his independent music last year, stumbling across his singles "Lemonade Sunday" and "Most Beautiful Thing". We're so glad to see him finally getting the attention he needs for such an amazing talent. - Jenn

Nashville, TN (March 4, 2014) - Rising star and The Voice Season 5 contestant Brandon Chase officially releases his debut single, "One," to country radio today.  The single, written by Zach Crowell (Cop Car), Randy Montana and Jaron Boyer, scored an early spin on 99.5 The Wolf in Dallas last week and many other stations are slated to follow suit.  Brandon Chase has been working on developing his sound and style for many years and "One," the catchy sing-along song with infectious beats, is the perfect introduction to his artistic abilities.

"I’ve been waiting for this day for so long.  I can’t believe it’s already here," exclaims Brandon Chase.  "This song is the product of many long hours of hard work and I couldn’t be more proud of it.  I hope the fans love it."

Early approval for Brandon Chase and his debut single is rolling in from media across the country.


"Brandon Chase is going to be an artist to watch that didn't NEED a "Voice" win... his first single, "One," keeps us on the road of country musics' ever-evolving sound, while giving us a song we LOVE to sing along to on the radio.  We here at the Wolf in Dallas consider him a hometown hero as we've watched his journey so far, thrilled to be the first station to play, "ONE!"  A true Gentleman for Country Music, too!"
- Lisa Taylor, 99.5 The Wolf Dallas


"A breezy slice of folk and rock-tinged country, the sweet, engaging 'One' marks Brandon Chase as not only a hopeless romantic, but an impressive Nashville talent worth keeping an eye on."
- Preston Jones, Fort Worth Star-Telegram


"I've seen Brandon's inestimable talents in action on stage and in the studio.  He exemplifies country music TODAY with his authenticity, attitude and style.  In the studio his work-ethic and skill-set are prodigious.  When the world experiences his debut single 'ONE,' these qualities will be undeniable.  I can't wait to see Brandon Chase's continued personal and professional accomplishments.  Country Music's historic momentum continues and artists like Brandon Chase keep it flourishing!"
- Ryan Drean, TM Studios/Westwood One


"Brandon Chase is one of the most grounded artists to hit the scene in the past decade.  He possesses a unique magnetism that shines through his music.  His new single, 'One,' shows off his clear vocals coupled with a catchy hook and a relatable message.  Brandon is definitely one to watch in 2014."  - Kim Hooker, CMChat/Hooked Up Country

"Brandon Chase was the new star of CRS 2014 for me.  Top priority is breaking him in my market!" -  Ryan McCall, WGLR

"Brandon Chase is a talented vocalist who delivered a brilliant debut single. Definitely one to watch." -  Matt Bjorke, Roughstock

Brandon Chase is nothing shy of a miracle. Only a few days old, Brandon quit breathing 64 times in 12 hours and was told by doctors he could be deaf, blind, mentally impaired, or possibly all three. Not only did the Arlington, TX native not suffer any complications from his childhood, he instead went on to graduate high school at the age of 15. He then completed his masters certificate in songwriting from Berklee College of Music at the age of 17. Brandon taught himself how to play the piano and guitar and has been writing his own original music since the age of 14. Brandon was featured on iTunes "New and Noteworthy" and also "Rising Stars of Country," following the release of his latest EP Country Enough. His most recent achievement was appearing multiple times on season 5 of NBC's The Voice as a member of Blake Shelton's team. Brandon is currently recording new music set to release in 2014. His debut single, "One," hit country radio today.