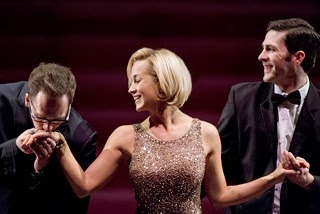 The performance drew a standing ovation, and the audience once again roared with applause when Pickler took final bows with the dancers. During the night, Pickler spoke about her love for storytelling through both song and dance.

The 2014 black tie gala marks the Ballet Ball’s silver anniversary. For 25 years, Ballet Ball has provided necessary funding for Nashville Ballet’s Outreach & Education Program, which introduces the art of dance to more than 30,000 children and families throughout Nashville and the surrounding area each year.

Pickler discovered her passion for dance last year when she competed on, and ultimately won, ABC Television’s “Dancing with the Stars.” Her partner and coach from the show, Derek Hough, later choreographed and danced with her in the music video for “Someone Somewhere Tonight,” which was nominated for an American Country Award for Music Video of the Year – Female in 2013.

Posted by LovinLyrics at 7:43 PM