THIS IS HOW WE ROLL SUMMER SERIES 2014 Launches In May, Featuring Multi-Platinum Superstar Nelly and Opening Act Chris Lane 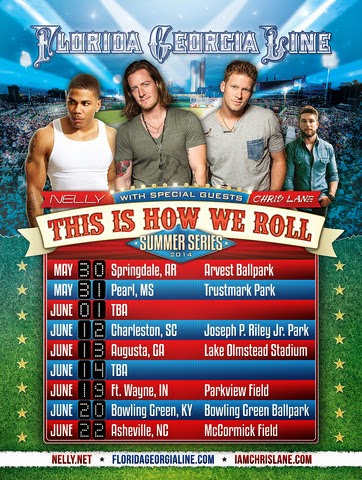 NASHVILLE, TN - (March 14, 2014) – As announced across social media earlier today, reigning ACM New Artist of the Year Florida Georgia Line will turn up the heat with their headline run -- THIS IS HOW WE ROLL SUMMER SERIES 2014. Kicking off May 30 in Springdale, AR, the sizzling new tour will slide into select baseball stadiums and feature special guest, Grammy Award-winning Nelly and opening act Chris Lane.

“Last year we played the ballpark in Lexington, Kentucky and it was an epic night,” says Brian Kelley. “We thought how fun would it be to hit several of these and bring the good times to the field!”

Tyler Hubbard adds, “Summer can’t get here fast enough. Having Nelly and Chris along for the ride is going to make for one big, outdoor party!”

FGL has exploded since releasing four consecutive, multi-week #1 smashes in the US and Canada with the GOLD-certified “Stay,” the PLATINUM-certified hits “Get Your Shine On” and "Round Here," and 6X PLATINUM “Cruise,” whose sales are combined with the remix featuring Nelly. Breaking the record for longest #1 on Billboard’s Hot Country Songs Chart, “Cruise” has sold nearly 6.8 million downloads in the US alone and is the best-selling digital Country single of all time according to SoundScan. Nelly's remix on the summer anthem helped maximize the reach across multiple genres and platforms. The award-winning duo’s current single “This Is How We Roll” featuring Luke Bryan is quickly climbing the country radio charts and is from the deluxe version of their chart-topping, PLATINUM-certified debut album HERE’S TO THE GOOD TIMES (Republic Nashville).

FGL has racked up four nominations - Vocal Duo of the Year, Album of the Year (HERE’S TO THE GOOD TIMES), Single of the Year (“Cruise”) and Vocal Event of the Year (“Cruise” Remix featuring Nelly) - for the ACM Awards, airing April 6 at 8:00P Eastern on CBS. Earlier in the weekend (April 4), FGL will join labelmates at the ACM Party for a Cause Festival for "Outnumber Hunger Live!" to raise awareness for the 1 in 6 Americans who struggle with hunger.

Posted by LovinLyrics at 2:07 PM