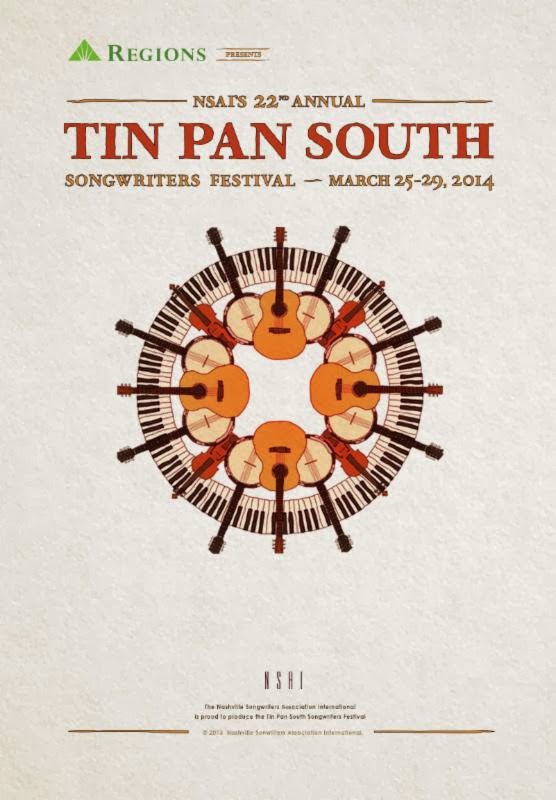 (Nashville, Tennessee...) -- The 22nd Annual Tin Pan South Songwriters Festival Presented by Regions Bank features the top songwriters in almost every form of music, and organizers today announced the initial performers in this year's exciting five-day event. Tin Pan South is set for Tuesday, March 25 through Saturday, March 29 at 10 popular Nashville-area venues, and the current lineup can be seen at TinPanSouth.com.

This year's lineup includes some of the biggest names in songwriting, and fans will enjoy hearing many of their favorite songs as they were originally written. Numerous artist songwriters will hit stages at this year's event including Rascal Flatts' Joe Don Rooney, Vince Gill, Craig Campbell, Alabama's Teddy Gentry and Jamie O'Neal. Songwriters Hall of Fame members Mac Davis and Sonny Curtis join new artists Angie Johnson, Jaida Dreyer, Paul Sikes, Leah Turner, Erin Enderlin and others to give a glimpse into the history and the future of songwriting, and hit pop songwriter and former "American Idol" judge Kara DioGuardi returns this year.

The popular Fast Access Passes, which allow patrons to bypass the cover charge at the door, are on sale now by clicking here. Quantities are limited and always sell out quickly. Pass holders are also allowed advance seating (room permitting) over those purchasing tickets at the door.

Produced by NSAI, Tin Pan South reigns as the world's largest all-songwriter festival. Last year close to 350 talented songwriters performed over 90 shows at ten of Nashville's top music venues. Thousands of music fans attend the event annually to hear songwriters tell stories behind hit songs they have written and perform the songs as they were originally composed. Regions Bank returns for the seventh year as the presenting sponsor of the event.

Organizers of the 22nd Annual Tin Pan South Songwriters Festival would like to thank the following sponsors:

Posted by LovinLyrics at 1:37 PM