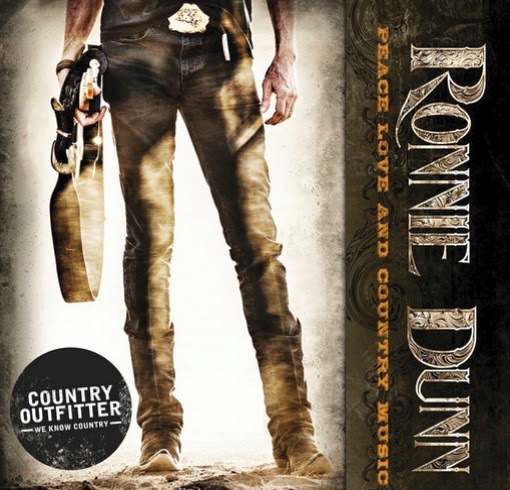 Well damn it, it's about time. Ronnie Dunn just put some actual country back in country music with his latest release, "Peace, Love and Country Music." This time, he's doing it HIS way, unapologetically, and he's following his own dirt road of musical independence with this new release on his own label, Little Will-E Records.

Country has been breathing the same stale air for the past couple of years, and yes, while there have been maybe a handful of more traditionally infused country releases, this one finally clears that air just enough so we can breathe again. Radio keeps saying "country's evolving", "there's room for everyone in country" but unfortunately that just hasn't seemed to ring true as of late when it comes to veteran artists, those who have chosen to maintain a style steeped in country tradition, who haven't crossed that genre bending line of pop/country. If that is true, how about adding songs from this cd to your playlists and filling some of that "room" with music from this cd and give fans something to hang on to? Fans want it, they've been extremely vocal about the lack of twang, the lack of substance and the lack of music that is easily distinguished from every other song in the Top 20. Ronnie Dunn is nothing if not distinguishable and his music is more than easily identified in a country music lineup. Now granted, there are a few songs on the cd that aren't "that country" and are more rock oriented with some "bro-country" lyrics, but for the most part, this cd is fantastic.

The very first track, "Grown Damn Man", pretty much tells you the story of Ronnie Dunn. He's been around the block a time or two or seven, he's seen the good, the bad and the ugly yet he still remains who he is and he may be "rough around the edges" but when it comes to living his life, he's doing it his way and keeping true to his path. That's why we love him. Honesty is hard to come by, but not when it comes to the music of Ronnie Dunn. I really don't have to break down every track on this cd because I honestly don't have time to write a book and trying to express just how good this cd is would require a lot of time because it is just that good. I will say that his rendition of "You Don't Know Me" will make you want to smoke a cigarette when it's over, even if you've never smoked a cigarette in your life. *WHEW*. I'm just gonna save the time and tell you that this cd is mama's Sunday cookin, it's a worn leather saddle on an old broke horse, it's a few spins around a sawdust floor with a partner, it's memories made new again and at times, it is also somewhat of the "spur in your saddle" that makes you sit up and pay attention. It's a combination of Ronnie's spirit, his heart and his relentless pursuit of consistently bringing good music to country music fans. "Peace, Love and Country Music" is exactly the 3 things it's named for - it brings PEACE when you just want to hear some great music,  it's the perfect cure when you miss the kind of music that made you fall in LOVE with country in the first place, and it's COUNTRY MUSIC done Ronnie Dunn style. This cd says that it's time to just let this long, tall cowboy rock.

You can pick up your copy of "Peace, Love and Country" on CountryOutfitters.com or you can download it digitally on iTunes today. Be sure to leave a review if you download it and let Ronnie know what you think.

Connect with Ronnie online at the following places (and yes, he does personally interact):