ERIC CHURCH WILL LAUNCH THE OUTSIDERS WORLD TOUR IN SEPTEMBER 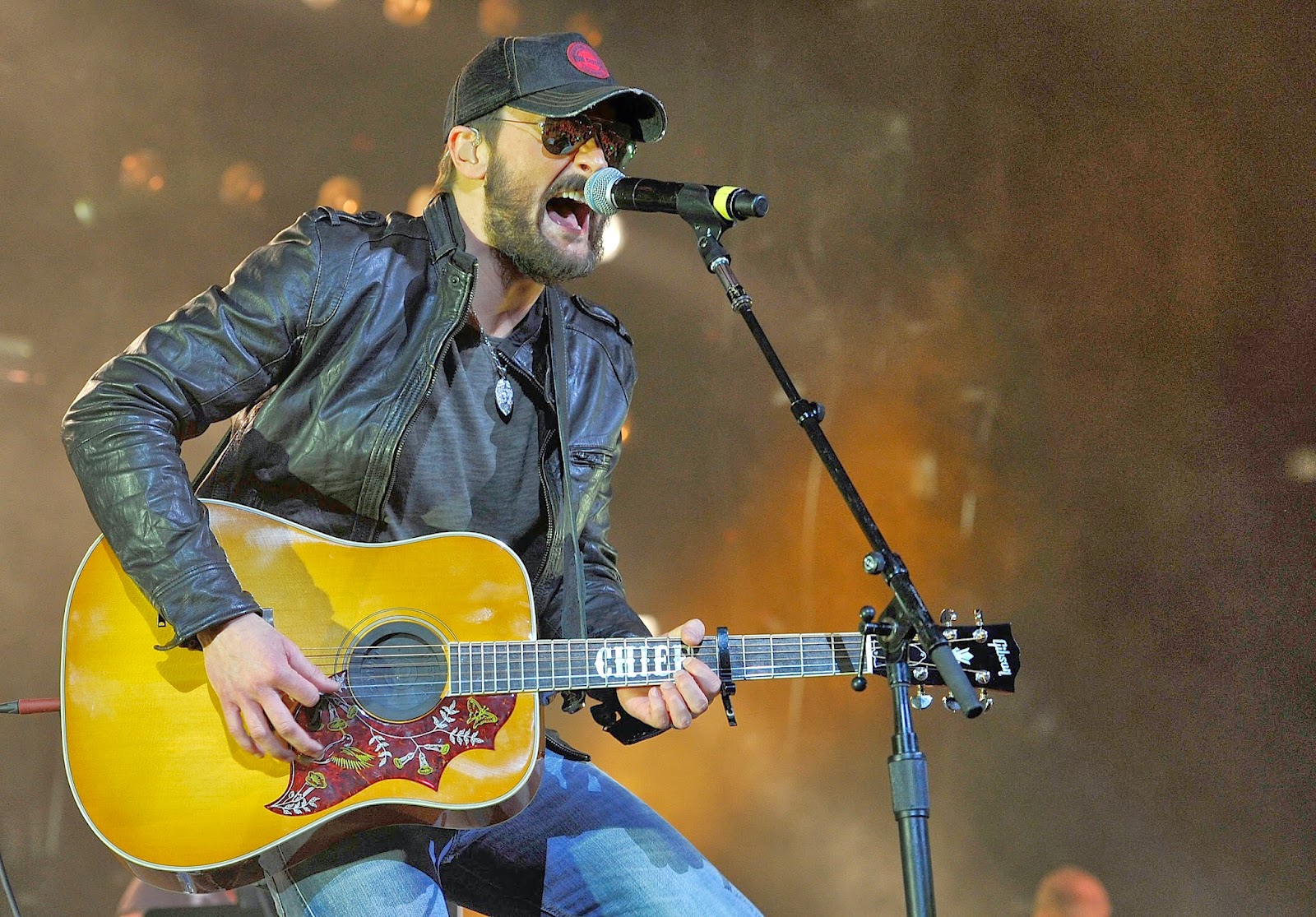 NASHVILLE, Tenn. – (April 9, 2014) –Eric Church’s The Outsiders World Tour will launch in North America on September 11, 2014 with 31 arena dates being announced today. Tickets for the tour, which beings in Bossier City, Louisiana, will go on sale April 18 in select markets with additional information made available on EricChurch.com. Members of the Church Choir will have access to a pre-sale starting on April 15. Church selected Dwight Yoakam as the special guest for the entire tour. Opening the tour on different dates throughout the first leg will be rising country music duo Brothers Osborne, critically acclaimed singer/songwriter Brandy Clark, or the hard rocking band Halestorm.

Hailed as a top entertainer by The New York Times, Rolling Stone, SPIN Magazine, and more, Church will bring his rip-roaring attitude when he performs at venues such as Madison Square Garden, Quicken Loans Arena in Cleveland, Wells Fargo Center in Philadelphia, the Sprint Center in Kansas City, the Arena at Gwinnett Center in Atlanta, Thompson-Boling Arena in Knoxville, and FedExForum in Memphis, among others. Church will also return to the Greensboro Coliseum in Greensboro, N.C. where he sold more than 15,000 tickets in 2012 as part of his headlining arena tour, The Blood, Sweat & Beers Tour—which Pollstar named a Top Tour of 2012.

While The Blood, Sweat & Beers Tour employed a succession of backdrops as the focus of the show, Church's The Outsiders World Tour will use a much more high tech design and will offer fans a 360° view of the entertainer and his band.

On sale dates and ticket information for each market will be announced on EricChurch.com. The best seats on The Outsiders World Tour will once again be paperless so fans get them instead of scalpers.

A limited number of VIP tickets for each show will also be available for purchase. Each VIP ticket includes a premium ticket in the first 15 rows or in the general admission pit, an invitation to a pre-show party at The Outsiders Joint, a two song acoustic pre-show performance by Eric, a limited edition show poster, and a dedicated VIP concert concierge.

Fans have the chance to gain access to pre-sale tickets for each show by becoming a Standard or Premium member of the Church Choir. Join the Church Choir by visiting http://smarturl.it/churchchoir.

Church’s current album, The Outsiders, debuted at No. 1 on the Billboard Top 200 Albums Chart and the Billboard Country Albums Chart earlier this year, and his current hit single “Give Me Back My Hometown,” is Top 5-and-rising. “Eric Church is working on a level that few other country artists of his generation can touch,” said Ken Tucker at NPR Music in his review of the album, continuing, “Shrewd, defiant, sly and funny, Eric Church has succeeded in what he set out to do: He’s using the power he’s accrued from making hit records to make exactly the kind of album he wants, heedless of industry approval. And this is how good he is: Now he’ll go out and — through the singles he’ll release, the touring he’ll do and the videos he’ll make — probably turn this personal project into a big commercial deal. The Outsiders deserves nothing less.”

The Outsiders is the follow-up to Church’s Platinum-certified album Chief, (named the 2012 Album of the Year by both CMA and ACM, and GRAMMY-nominated for Best Country Album) which featured five Top 20 singles: “Homeboy” (certified Platinum for sales in excess of one million singles); the Top 10 “Like Jesus Does” and the Top 5 “Creepin’” (both certified Gold for sales in excess of 500,000 singles each); and two No. 1 hits “Drink in My Hand” (certified Platinum) and “Springsteen” (certified Double Platinum for sales in excess of two million singles). Church’s debut album, Sinners Like Me (2006) and his sophomore album Carolina (2009) are both RIAA Gold-certified. Carolina had three hit singles: the Top 10 “Hell on the Heart” as well as Top 20 hit “Smoke A Little Smoke” and Top 10 smash “Love Your Love The Most,” which were both certified Gold. Sinners Like Me spawned three Top 20 singles: “How ‘Bout You,” “Two Pink Lines,” and “Guys Like Me.”

Dwight Yoakam has sold more than 25 million albums worldwide, placing him in an elite group of global superstars. Nearly 40 of Yoakam’s singles have charted, with 14 peaking in the Top 10, including the hits “Honky Tonk Man,” “Please, Please Baby,” “Little Ways,” “I Sang Dixie,” “It Only Hurts When I Cry,” and “Fast as You.” He is a 21-time nominated, 2-time GRAMMY Award winner. In celebration of his latest critically acclaimed album, 3 Pears, he received the Artist of the Year award at the 2013 Americana Music Honors & Awards ceremony, the most prestigious award offered by the organization. In 2014, Yoakam will appear as a recurring guest star in multiple episodes of the thrilling CBS series, “Under the Dome,” based on Stephen King’s best-selling novel of the same name. For more information, visit www.dwightyoakam.com.

For John (guitar) and TJ (vocals/guitar) Osborne, getting into music was unavoidable. Growing up in the water town of Deale, Maryland, their close-nit-family of seven spent most nights not in front of the television, but writing and playing songs. In April 2011, Warner Chappell/King Pen Music offered them a publishing deal. A year later, Capitol Records offered them a record deal. The Brothers Osborne are currently in the studio finishing their debut album, an album they describe as “aggressive, bold and fragile at times.” Their current single is “Rum.” For more information, visit www.brothersosborne.com.

Brandy Clark’s debut album, 12 Stories, was released in October 2013 and has received tremendous critical acclaim. When reviewing 12 Stories, Randy Lewis of The Los Angeles Times wrote, “This is the country debut of the year.” Clark was nominated for her first GRAMMY Award earlier this year for Best Country Song for “Mama’s Broken Heart,” which she co-wrote with Shane McAnally and Kacey Musgraves and Miranda Lambert took to No. 1. That song also earned Clark her first CMA and ACM nominations, both for Song of the Year. Clark as been on tour with Jennifer Nettles. For more information visit www.brandyclarkmusic.com.

Upon its release, The Strange Case Of…, the second album from Atlantic Records artist Halestorm, shot to the No. 1 slot on Billboard’s Hard Rock Albums chart. The first single, “Love Bites (So Do I),” marked the first song by a female fronted group to top the active rock chart, and earned the band a GRAMMY award for Best Hard Rock/Metal Performance. The song was also the No. 1 song of 2012 on SiriusXM’s Octane. The band’s second single “Freak Like Me” also hit No. 1 on the Active Rock chart and their third single “Here’s To Us” saw incredible chart success as well. Halestorm also released their second covers EP last fall, ReAniMate 2.0: The CoVeRs eP, which saw the band putting their distinctive brand another eclectic collection of classic songs. In addition to releasing her own clothing and accessory line this past fall, “Scissor Happy,” frontwoman Lizzy Hale has also garnered national media attention appearing on the cover of Revolver’s “Hottest Chicks in Hard Rock” issue twice. The band has also performed on Jimmy Kimmel Live and Late Night With Jimmy Fallon. Halestorm is currently on a sold-out European tour and working on their third studio album. For more information, visit www.HalestormRocks.com.

The first leg of the tour will take place throughout Sept.-Dec. in the U.S. and Canada and is exclusively promoted by Louis Messina of The Messina Group/AEG Live. The dates for the first leg of The Outsiders World Tour with special guest Dwight Yoakum (#TheOutsidersLive) are as follows: