Tickets On Sale To The Public Today 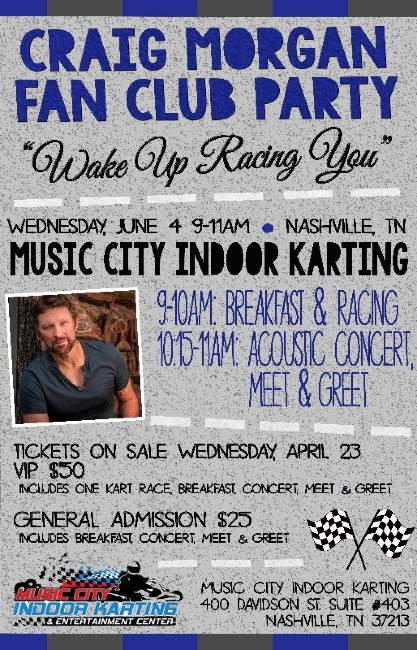 Nashville, TN – April 23, 2014 – Craig Morgan is off to the races for his 2014 official fan club party! The “Wake Up Lovin’ You” singer will showcase his sporty side as he challenges fans to a go-kart race at Music City Indoor Karting & Entertainment Center on Wednesday, June 4 from 9-11am. Attendees will also be treated to a light breakfast, acoustic concert and meet & greet with Morgan.

Tickets are available to the public HERE beginning today at 10am CDT. General admission tickets are $25 to include race spectator tickets, breakfast, acoustic concert and meet & greet. A limited number of VIP tickets allowing attendees to get behind the wheel and challenge Craig can be purchased for $50 while quantities last.

The Black River recording artist’s latest single, “Wake Up Lovin’ You” is currently at number 15 on the chart and sold nearly 11,000 downloads last week. “Wake Up Lovin’ You, written by Josh Osborne, Matt Ramsey and Trevor Rosen is featured on Morgan’s recently released album The Journey (Livin’ Hits).
Posted by LovinLyrics at 11:15 AM