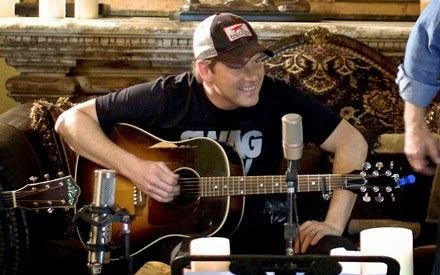 Atkins and Falcon each donated several items for the auction, which ended Sunday evening, including handwritten and autographed lyrics and personal mementos such as Atkins’ first mounted buck and artwork painted and signed by Falcon. Other donated items included a guitar autographed by Atkins and Joe Nichols, a cowboy hat autographed by Justin Moore, and various items signed by artists such as Keith Urban, Tim McGraw, Zac Brown Band, Lee Brice, Dustin Lynch and Jana Kramer.

“Holston United Methodist Home took care of me as an infant and helped me find a place with my adoptive parents,” said Atkins. “It means so much to Rose and me to be able to give back to them through music and with the help of our fans and friends.”

Atkins is currently working on his fifth studio album for Curb Records and performing headlining dates across the country. For more information, please visit www.RodneyAtkins.com or follow on Twitter at @RodneyAtkins and Facebook.

Posted by LovinLyrics at 3:57 PM