ECKRICH AND RANDY HOUSER HOST A WELCOME HOME FOR OUR HEROES 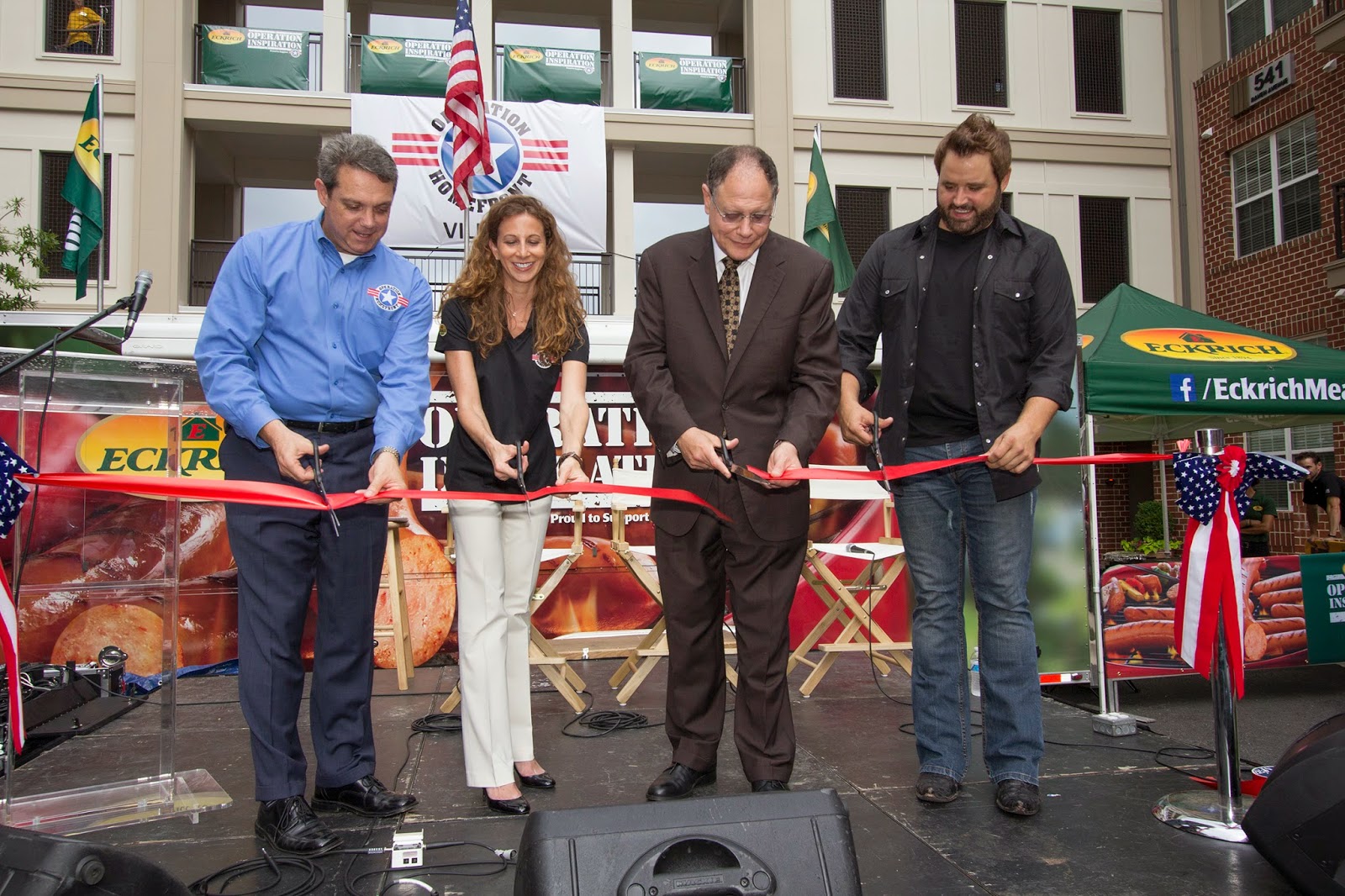 Gaithersburg Mayor Sidney A. Katz and members of his council were also in attendance to celebrate the opening of the new Operation Homefront Village located at Hidden Creek Apartments. The Village will provide the military families with rent-free accommodation while they transition from the military to civilian life due to their injuries.

Houser performed for the Operation Homefront Village families and several hundred Hidden Creek Apartments residents in attendance and also distributed a $100 gift card good at Giant Food stores to each Village family, on behalf of Eckrich. Prior to his performance, Houser spent one-on-one time with selected military families who are currently Village residents and personally thanked each family for their service to the country and for their sacrifice. Houser has been a supporter of our military troops and their families throughout his career, and has even traveled to Iraq to perform for the active soldiers there.

"The men and women who serve this country, and their families, sacrifice so much to protect our freedom," said Houser. "It's an honor to have the opportunity to show our appreciation and join Eckrich in supporting military families with Operation Homefront."

The visit and cookout were part of the Eckrich "Operation Inspiration" campaign which supports and honors military families. This is Houser's first year of partnering with Eckrich and his participation with the award-winning campaign. He will continue to honor military families throughout the summer at select concerts and events.

"We are thrilled to be able to host the housewarming for the new Operation Homefront Village," said Chuck Gitkin, vice president, marketing, innovation and R&D for the John Morrell Food Group. "Having Randy (Houser) and the community join us for this event and cookout, really makes for a memorable day for our military families. This new Village provides an unbelievable relief for these families and today's visit and performance from Randy was our way to welcome them to their new home."

Now in its third year of partnership with Operation Homefront, Eckrich has already donated more than a half a million dollars to the organization. Eckrich is again donating up to $250,000 this year through the contribution of five cents from each purchase of specially marked products from May 1 through July 4. Operation Homefront is a non-profit organization which provides emergency housing, financial and other assistance to service members and wounded warriors.

"We couldn't be happier to be joined by Mayor Katz, Randy Houser and our good friends at Eckrich to celebrate the opening of our new Village," said Jim Knotts, Operation Homefront's president and CEO. "Our Village program affords wounded warriors and their families with stable housing while they transition from the military, addressing the critical gap that so often exists before they begin receiving veteran benefits."

Each furnished Village apartment - including the cost of financial counseling and other transition programs for residents - costs more than $20,000 per year with a total program budget of more than $1.5 million for three Village locations across the country. The program is made possible by generous contributions from individual donors, corporate foundations and partners. No federal funding is provided.

For more information about Eckrich, including "Operation Inspiration," it's partnership with Randy Houser and its mobile sampling tour, please visit www.facebook.com/EckrichMeats.

Posted by LovinLyrics at 5:29 PM