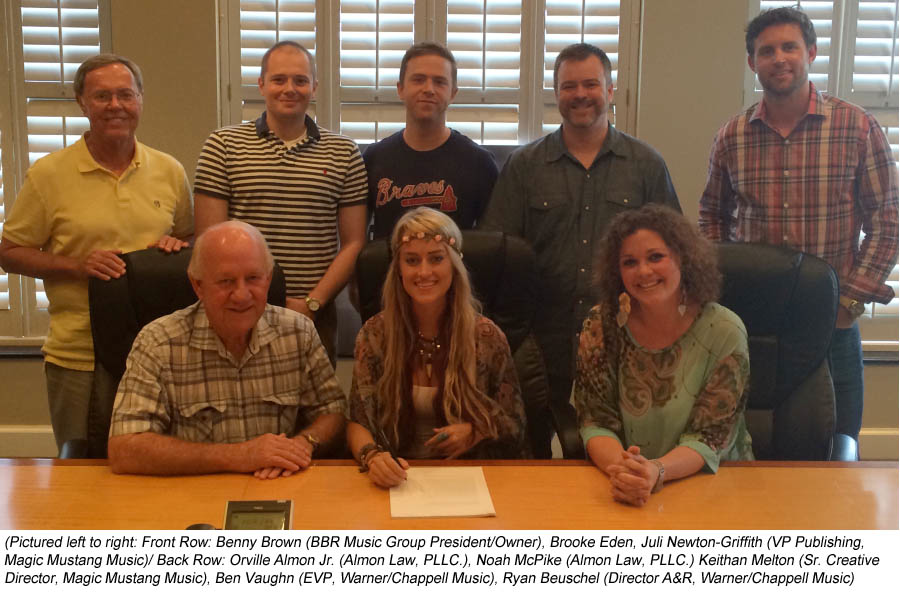 (Nashville, TN) – Magic Mustang Music and Warner/Chappell Music are excited to announce the joint signing of Brooke Eden to their respective publishing rosters. This marks the first co-venture signing deal between the two companies.

A Florida native, Brooke has been writing and performing country music since she was just five years old. Over the past four years, she has opened for some of the biggest names in country, from the likes of Alan Jackson, Sugarland, Brooks & Dunn, Florida Georgia Line, Sara Evans, Dustin Lynch and more. Currently in rotation on SiriusXM’s The Highway, Brooke co-penned her single “American Dreamin” alongside hit songwriters Sherrie Austin and Will Rambeaux.

"I'm so thrilled to be signing my new publishing deal, a co-venture with Magic Mustang Music and Warner/Chappell Music. I've admired both of these companies for a while and really feel I've found the best of two worlds," says Brooke. "The fact that this is my first publishing deal and this is their first co-venture together makes it even more special. Thank y'all for 'American Dreamin' with me! Yo, here we go!"

"Brooke Eden is an amazing talent,” says Juli Newton-Griffith, VP Publishing for Magic Mustang Music. “This is going to be a wonderful, wild ride, and we are happy to be partnering with Warner/Chappell for this venture."

“Brooke Eden’s writing is topical, fresh and speaks to her generation in a very unique way,” says Ben Vaughn, EVP of Warner/Chappell Music Nashville. “Warner/Chappell is proud to partner with our friends at Magic Mustang in supporting this talented writer.”
Posted by LovinLyrics at 3:56 PM