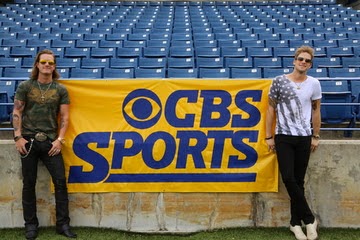 NASHVILLE, TN (September 12, 2014) - CBS Sports has teamed up with superstar duo FLORIDA GEORGIA LINE for its SEC ON CBS broadcasts. The reigning CMA Vocal Duo of the Year has recorded a customized version of the song “That’s What’s Up” off a deluxe edition of their highly anticipated second album ANYTHING GOES (Republic Nashville), due out October 14. The song, along with elements from a video shoot with the duo, will be utilized as part of CBS Sports’ national coverage of Southeastern Conference football throughout the season.

The customized song highlights the pageantry and passion around SEC football. CBS Sports also will incorporate elements from FLORIDA GEORGIA LINE’s massive tailgate party to kick off GEORGIA-FLORIDA weekend and headline the ANYTHING GOES TAILGATE 2014 concert at the Jacksonville shipyards on October 31 in its broadcast of the annual Florida vs. Georgia game, played the next day (Saturday, Nov. 1; 3:30 PM, ET).

SEC ON CBS kicks off this Saturday, Sept. 13 (3:30 PM, ET) with *No. 6-ranked Georgia taking on No. 24-ranked South Carolina. Getting their game on, FGL's Brian Kelley and Tyler Hubbard are playing Fantasy Football on CBSSports.com this year, competing against fans who won a spot in the duo's league.