ERIC CHURCH “THE OUTSIDERS WORLD TOUR” TO KICK OFF SEPTEMBER 11

NASHVILLE, Tenn. – (Sept. 03, 2014) – EMI Nashville recording artist Eric Church, who recently appeared on the cover of Rolling Stone and whose current album The Outsiders is currently the No. 3 best-selling album of 2014, is poised to return to the road in full force when “The Outsiders World Tour” launches its first leg on Sept. 11 in Bossier City, LA. The initial 30+ cities on the tour have been announced and will include a stop in New York City at Madison Square Garden on Oct. 17. Church will also perform on NBC’s "The Tonight Show Starring Jimmy Fallon" on Wednesday, October 15.

Earlier today, CMA announced that Church received four CMA Award nominations: Male Vocalist of the Year, Album of the Year for The Outsiders (produced by Jay Joyce), and both Single and Song of the Year for "Give Me Back My Hometown" (written by Church and Luke Laird and produced by Joyce).

This is Church’s return to headlining since “The Blood, Sweat & Beers Tour,” which was named a Pollstar Top Tour of 2012 and one of the “Best Concerts of 2012” by the New York Times. While that tour employed a succession of backdrops as the focus of the show, the new “The Outsiders World Tour” will use a much more high tech design and will offer fans a 360° view of the entertainer and his band.

“Eric Church is working on a level that few other country artists of his generation can touch,” said Ken Tucker at NPR Music, with The New Yorker recently stating that “Church has more complex narrative material…his version of country [has] a broader social gaze than many expect.” Rolling Stone named him among their list of “50 Greatest Live Acts Right Now.”

Music legend Dwight Yoakam will join Church as special guest for the entire duration of the tour while rising country music duo Brothers Osborne, critically acclaimed singer/songwriter Brandy Clark, and the hard rocking band Halestorm will open on various dates throughout the tour. 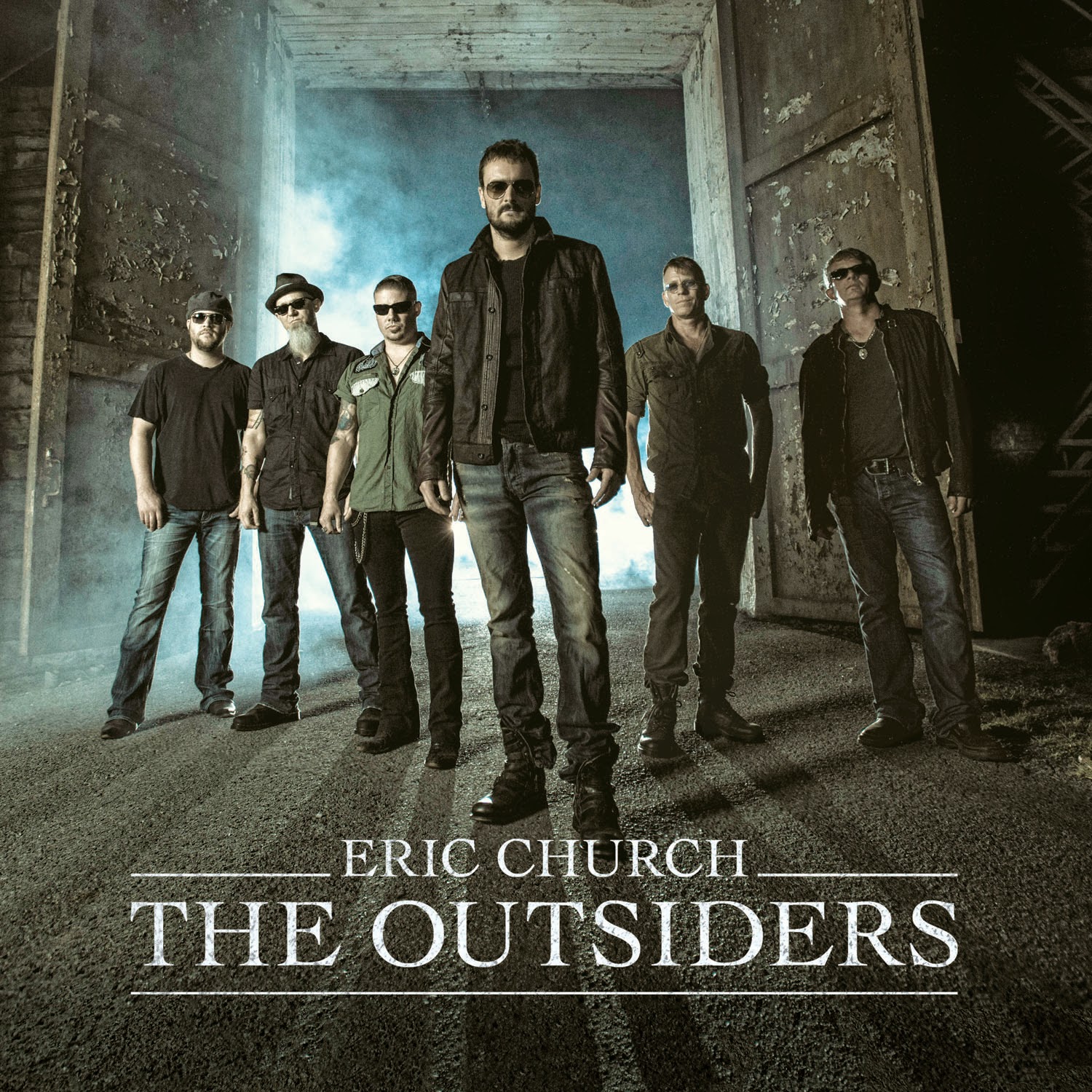 The first leg of the tour will take place throughout Sept.-Dec. in the U.S. and Canada. The dates for the first leg of “The Outsiders World Tour” (#TheOutsidersLive) are as follows:

A limited number of VIP tickets for each show are available for purchase. Each VIP ticket includes a premium ticket in the first 15 rows or in the general admission pit, an invitation to a pre-show party at The Outsiders Joint, a two song acoustic pre-show performance by Eric Church, a limited edition show poster, and a dedicated VIP concert concierge.

Fans have the chance to gain access to pre-sale tickets for each show by becoming a Standard or Premium member of the Church Choir. Being part of the Church Choir also allows fans to take part in private fan club parties and opportunities to meet Eric, and they are the first to get the news on his activities before the rest of the world. Join the Church Choir on Eric's website: http://smarturl.it/churchchoir.

In addition, two front row tickets and two VIP lounge passes will be given away for each show on the tour to Church Choir members. Members can apply for these tickets by connecting their Facebook through Eric's site: http://smarturl.it/TheOutsidersAreIn.

Church’s current album, The Outsiders, debuted at No. 1 on the Billboard Top 200 Albums Chart and the Billboard Country Albums Chart earlier this year, and his current hit single “Cold One” is rising up the charts. The Outsiders is the follow-up to Church’s Platinum-certified album Chief, (named the 2012 Album of the Year by both CMA and ACM, and GRAMMY-nominated for Best Country Album) which featured five Top 20 singles: “Homeboy” (certified Platinum for sales in excess of one million singles); the Top 10 “Like Jesus Does” and the Top 5 “Creepin’” (both certified Gold for sales in excess of 500,000 singles each); and two No. 1 hits “Drink in My Hand” (certified Platinum) and “Springsteen” (certified Double Platinum for sales in excess of two million singles). Church’s 2006 debut album, Sinners Like Me (2006) and his sophomore album Carolina (2009) are both RIAA Gold-certified. Carolina had three hit singles: the Top 10 “Hell on the Heart” as well as Top 20 hit “Smoke A Little Smoke” and Top 10 smash “Love Your Love The Most,” which were both certified Gold. Sinners Like Me spawned three Top 20 singles: “How ‘Bout You,” “Two Pink Lines,” and “Guys Like Me.” Visit www.ericchurch.com for more information. Follow Church on Facebook at www.facebook.com/ericchurch and on Twitter at twitter.com/ericchurch. #TheOutsidersLive

Yoakam has sold more than 25 million albums worldwide, placing him in an elite group of global superstars. He has 12 Gold albums and nine Platinum or multi-Platinum albums, including the triple platinum This Time. Five of those albums have topped Billboard’s Country Albums chart, with another 14 landing in the Top 10. Nearly 40 of Yoakam’s singles have charted, with 14 peaking in the Top 10, including the hits “Honky Tonk Man,” “Please, Please Baby,” “Little Ways,” “I Sang Dixie,” “It Only Hurts When I Cry,” and “Fast as You.” He is a 21-time nominated, 2-time GRAMMY Award winner. In celebration of his latest critically-acclaimed album, 3 Pears, he received the Artist of the Year award at the 2013 Americana Music Honors & Awards ceremony, the most prestigious award offered by the organization. In 2014, Yoakam will appear as a recurring guest star in multiple episodes of the thrilling CBS series, “Under the Dome,” based on Stephen King’s best-selling novel of the same name. The role is another example of Yoakam’s formidable presence as a film and television actor, capable of seamlessly melting into his roles, and impressively standing toe-to-toe with some of the world’s top thespians over the course of his storied and successful acting career, including Jodie Foster, Tommy Lee Jones, Forest Whitaker, and Nicolas Cage. For more information, visit http://www.dwightyoakam.com.

For John and TJ Osborne, getting into music was unavoidable. Growing up in the water town of Deale, Maryland, their close-nit-family of seven spent most nights not in front of the television, but writing and playing songs. The Brothers’ father had a shed behind their home that he used for small performances for friends and family. John and TJ could be caught listening in on their father’s playing or fetching beers for pocket change. Later their father would convert that shed into a home studio where their parents would write and record songs. As the brothers aged, they formed a band with their ever eclectic father named “Deuce & a Quarter.” The band played cover songs from Lynyrd Skynyrd to Dwight Yoakam to Merle Haggard to Bob Seger. They performed at local venues in the town, before John (guitar) moved to Nashville first to play in other bands. Two years later, TJ (vocals/guitar) moved to Nashville. It was then they formed Brothers Osborne and began playing as many writer rounds as they could. In April 2011, Warner Chappell/King Pen Music offered them a publishing deal. A year later, Capitol Records offered them a record deal. The Brothers Osborne are currently in the studio finishing their debut album, an album they describe as “aggressive, bold and fragile at times.” Their current single is “Rum.” For more information, visit http://www.brothersosborne.com.

Brandy Clark’s debut album, 12 Stories, was released in October 2013 and has received tremendous critical acclaim. When reviewing 12 Stories, Randy Lewis of The Los Angeles Times wrote, “This is the country debut of the year.” Rolling Stone’s Will Hermes noted, “Her debut is all airtight craftsmanship, sly wit and precise detailing that treats mainstream style like artisanal fast food.” New York Magazine’s Jody Rosen named 12 Stories his favorite album of 2013 remarking, “She’s a brisk, vivid, witty storyteller; her tunes unfold in old-fashioned weepers and chugging honkytonk, with fiddles, pedal steel, and vocal harmonies driving home the punch lines and pathos.” Hitfix’s Melinda Newman wrote that Clark was “the best new artist country radio isn’t playing” and that 12 Stories “made almost every music critics’ best of 2013 list for its heart, wit, smart wordplay, and Clark’s expressive vocals.” The Tennessean’s Peter Cooper observed in a cover story last November, “She is about expression, not impression. Which is why she’s impressive” before noting an already remarkable feat: “As voiced through others, her songs have moved two or three million other people. Now, Clark’s songs may be heard in her own rich voice.” Clark was nominated for her first GRAMMY Award earlier this year for Best Country Song for “Mama’s Broken Heart,” which she co-wrote with Shane McAnally and Kacey Musgraves and Miranda Lambert took to No. 1. That song also earned Clark her first CMA and ACM nominations, both for Song of the Year. Clark also wrote The Band Perry’s No. 1 hit “Better Dig Two” with McAnally and Trevor Rosen. Other artists to record her songs include Sheryl Crow, Reba McEntire, Kacey Musgraves, LeAnn Rimes, Darius Rucker, Keith Urban, Gretchen Wilson, and more. For more information visit www.brandyclarkmusic.com.

Frontwoman Lizzy Hale and her brother and drummer Arejay started Halestorm more than a decade ago when she was 13 and he was just 10, growing up in Pennsylvania. From the very beginning they were in it to win it even though they paid their dues along the way. Back in the day, the members lost a talent show to a tap-dancing cowgirl, played Friendly’s for free ice cream, piled the stage with homemade explosives that sometimes went off right in front of their faces, and even played at a funeral. Halestorm’s determination paid off. Before long, they were playing local bars even though they were underage. They secured guitarist Joe Hottinger in 2003 and bassist Josh Smith in 2004, and in 2005, Halestorm signed a deal with Atlantic Records and released the live EP, One and Done, which included an early version of fan favorite “It’s Not You.” The band continued to write, tour and record and in 2009 released their self-titled first full-length album, which spawned two top 10 singles (“I Get Off” and “It’s Not You”). In-between touring steadily for the next few years with acts as diverse as Shinedown, Stone Sour, Disturbed, Megadeth, Papa Roach, Godsmack and countless others, Halestorm released a live album (Live in Philly), two EPs of cover songs (ReAniMate: The CoVeRs and ReAniMate 2: The CoVeRs), and Hello, It’s Mz. Hyde, an EP that gave fans a preview of four songs from their second full-length album, The Strange Case of…, which came out in 2013. Musically diverse and emotionally revealing, the album resonates with a newfound poignancy that takes Halestorm to a new level of creative achievement. For more information, visit www.HalestormRocks.com.