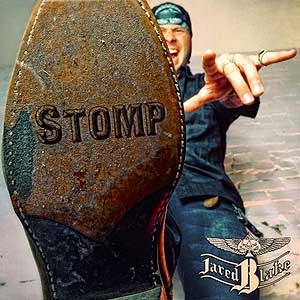 Purchase "Stomp" on iTunes and Amazon

Be sure to request "Stomp" on Sirius XM's The Highway! The single is being currently featured on their "On the Horizon" segment!


Jared Blake’s follow up to his previous singles “Don't Mind” and "Countryfied", “Stomp” starts out with a twangy banjo riff that carries throughout the song.  An ode to the music outside of lyrics, the beat that makes you want to “stomp.” For the first half of the song, you hear Jared’s whispering voice twisting through the guitar strumming and the drum beating, along with unidentified but very pretty female vocals as the song progresses his voice becomes stronger and louder and the gravel growl he’s known for becomes prevalent.  A dancing song that will succeed anywhere but would be most at home two-stepping on sawdust-covered wooden floors in a dance hall or honky-tonk.  I very much like the idea of a song that pays homage to the feeling when you get lost in the music itself, not focusing on the words or voice or anything but feeling the music pulse around you.  That is not to say that Jared Blake’s talented voice isn’t a wondrous thing, it’s just not the only thing happening in this song.  A reverse of the typical using the instruments to emphasize the song and the voice, here Jared is letting the music move you and having the strings twanging and drum beats take center stage.  A heady brew that makes even the most stagnant want to move.  I can’t wait to see what the video for this contains especially what sort of “Stomp” will be present, nor can I subdue my curiosity for his further projects.
Posted by LovinLyrics at 7:54 PM