"WAY BACK WHEN" WEDNESDAY - "FIRE AND RAIN" BY JAMES TAYLOR

Well it’s that time again... that time when we dig through our old picture boxes and pretend we still use picture boxes instead of memory cards to store our memories. It’s "Way Back When" Wednesday and today we are featuring James Taylor’s “Fire and Rain” a favorite childhood song of many throughout decades, including mine. 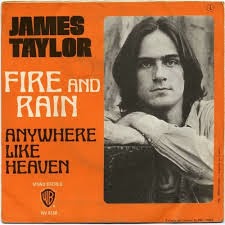 “Fire and Rain” made its first appearance in 1970 on his “Sweet Baby James” album. An autobiographical song written and sung by James Taylor, there are few songs that make one swoon with such lack of aplomb. "Fire and Rain" is a memorable song about a friend who passed and the memories shared with her. The stark loss of a friend from his younger years where their commonality was hospitals and their love of exploring new drugs, she had intentionally overdosed and died. He had said they weren’t that close, but enjoyed each other’s company. Any loss, especially a loss like that is going to hit you. You never think the last time you see a person is the last time you will see them, and that’s where the story begins here. A wake-up to clean himself up, he wrote this song in and out of hospitals. (Note: If you want this story in its entirety and many more interesting ones, go read “Fire and Rain” by David Browne. Fantastic read.)

A defining song of the 70’s when genres were less bright-line, most would consider James Taylor a fit in any genre he saw fit to transport himself into. I believe the two most common are classic rock and roll and country. A tremendous song and artist in any regard, an inspiration to artists everywhere and a song everyone with any sort of musical taste will continue to listen to.

James you are an amazing story-teller and an incomparable vocalist. Thank you for providing us with decades of music the likes of there never was before and never has been since.