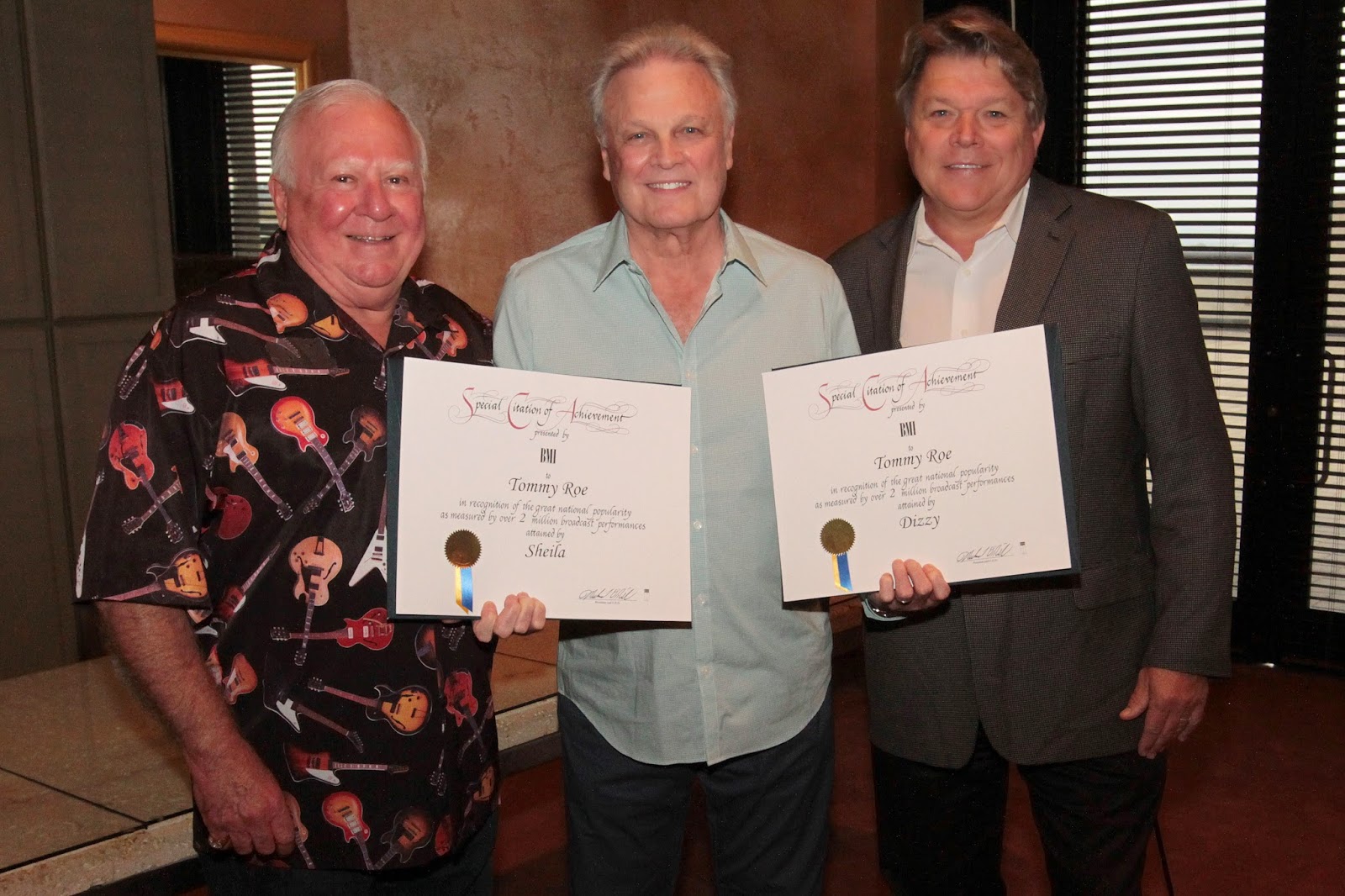 NASHVILLE, Tenn. (October 29, 2014) – Legendary performer Tommy Roe was in Nashville on October 28 to celebrate two of his all-time biggest hits – and the impact that they still have on the music world.

In a ceremony at the Nashville office of BMI, the veteran singer-songwriter was presented with certifications for his 1960s hits “Sheila” and “Dizzy” being played on the airwaves two million times – each. Roe admitted he knew that was a lot of spins, but he wasn’t sure what that number actually meant – until a representative from the performing rights organization explained it to him.

“BMI’s David Preston told me that if you played the record every hour for twelve years continuously, it would reach two million,” Roe said. “When you say it like that, it’s pretty much amazing,” he admitted. “I’m glad that there’s people out there that enjoy it, and it makes them happy. That’s what it’s all about.”

Though millions of fans around the world have sung along with Roe on “Sheila,” a number one hit from 1962, many have no idea that the singer originally titled the song “Frieda,” about a girl that he had a crush on back at Brown High School in Atlanta. He recorded the song in 1960, but the recording failed to light a fire at radio. Two years later, he would re-record the song, and the rest is history, as it topped the Billboard Hot 100 for two weeks.

Seven years later, Roe earned another chart-topper with “Dizzy,” a song that he penned with fellow artist Freddy Weller. In addition to the four weeks it spent on top of the charts in the United States, the record also topped charts in the United Kingdom as well as Canada. Over four decades later, to have both songs certified for spins of two million each is a very proud and humbling moment for the Georgia native.

“I wrote Sheila when I was fourteen years old. To think that I was a snot-nosed kid who wrote this poem for my girlfriend that I had a crush on in high school, and it turned into a number one song all around the world is amazing. Even more amazing is that fifty-four years later, I’m still celebrating that song, as well as ‘Dizzy.’ Singing the hits on stage is still special, and the audience response is always there.”

Roe is still performing for fans after all these years, and will soon be headlining shows at the South Point Hotel and Casino in Las Vegas. Among those in the crowd to celebrate the moment with Roe included longtime producer / promoter Mike Borchetta and his wife Martha. The music executive was responsible for several of Roe’s biggest career moments.