WANT TO MEET HUNTER HAYES ON HIS TATTOO (YOUR NAME) TOUR? 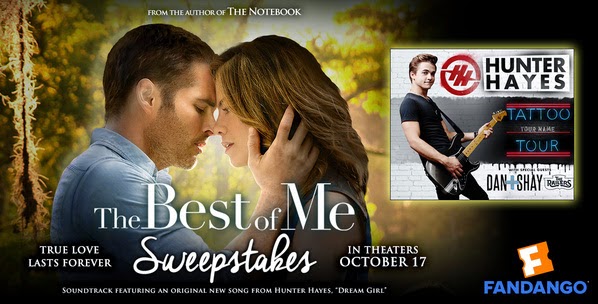 NASHVILLE, Tenn. (Oct. 7, 2014) – Four-time GRAMMY nominee Hunter Hayes is teaming up with Fandango, the nation’s leading moviegoer destination, to give fans a unique opportunity to meet Hunter and attend his concert on his forthcoming Tattoo (Your Name) Tour when they purchase tickets to The Best of Me, Relativity Studios’ new feature film hitting theaters nationwide on October 17. Hayes’ original song “Dream Girl” is included in the film’s soundtrack, which EMI Nashville is releasing today, October 7, in conjunction with Relativity Studios.

Hayes will kick off his highly-anticipated Tattoo (Your Name) Tour with a “Wild Card” solo show at New York City’s Best Buy Theatre on Tuesday, Oct. 28. Warner Music Nashville labelmates Dan+ Shay and The Railers will join Hayes as supporting acts for subsequent U.S. dates on the tour, which is presented by AEG Live/The Messina Group.

Dates for the Tattoo (Your Name) Tour are as follows: