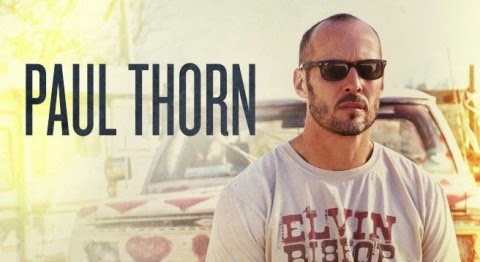 Paul Thorn is one of the best artists that many people may not have heard of. You won't find him soaking up the media spotlight, you won't see him walking the red carpet at the overabundance of music awards shows and you won't see any over the top headlining arena shows because that's not who Paul Thorn is as an artist and it's not what he's about. Keeping his head low, you're more apt to find him in a dark corner of Broadway in Nashville or a Memphis dive, performing to those who swig back shots at the bar with his signature style, keeping his music simple and meaningful, deep and soul wrenching. His blend of guitar slinging, gritty mix of country and bluesy vocals and blatant musical honesty makes Paul a true stand out in today's music world. You won't see or hear another artist like him and that's the way he likes it. He makes his mark as a stand-alone artist, and as someone who is tired of "conveyer belt" artists, that's something I truly appreciate about Paul.

For Paul, his new single says it all, "Everything's Gonna Be Alright."