75-Plus City Tour Touts Over 650,000 Fans In Attendance
Rave Reviews Of Owen’s Live Show Roll In 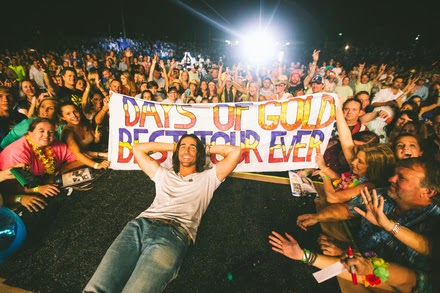 Jake Owen dives into the crowd near the end of his set at his last DAYS OF GOLD tour stop in Vero Beach, FL on October 25, 2014, to capture this moment with fans
Photo Credit: Nick Rau

The Platinum-selling vocalist – who brought friends the Eli Young Band, Parmalee, The Cadillac Three and Thomas Rhett, to warm up the crowd – took his signature kicked-back yet bring it performance to over 650,000 fans on the 75-plus city nationwide tour presented by Discover Boating. Fueled with rave reviews, Owen continues to stake his claim as one of country’s music’s leading entertainers:

“Owen’s beach bash went off largely without a hitch.”

“…given the undeniable energy he [Owen] exudes on stage…”

“Owen used every inch of his headlining stage to transform the venue into a tropical hotspot.”

“…a performance that can be summed up in one simple word – fun.”

“…a welcome new wave in the genre.”

Known for his laidback, good time atmosphere, Owen’s show is not without moving moments, including the crowd-silencer “What We Ain’t Got,” which highlights Owen’s powerful voice set to only a wistful piano. Featured on his current album DAYS OF GOLD, the new single is deeply resonating with fans and music critics alike from ROLLING STONE to TASTE OF COUNTRY to MUSIC ROW MAGAZINE.

Previously taking home ACA and ACM Awards, Owen has ascended to stardom with five #1 smashes – GOLD-certified hits “The One That Got Away,” “Anywhere with You,” PLATINUM-certified “Alone with You,” “Beachin’” and 2X PLATINUM “Barefoot Blue Jean Night” – and his chart-topping, GOLD-certified album BAREFOOT BLUE JEAN NIGHT, selling well over 5 million tracks to date.

Posted by LovinLyrics at 9:36 AM