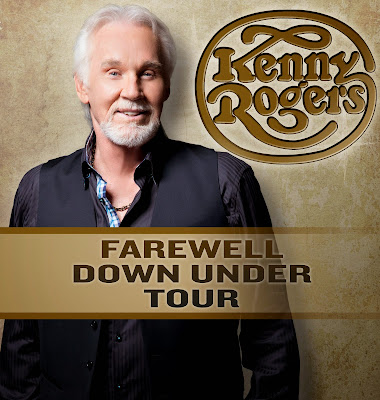 Nashville, Tenn. (November 11, 2014) – GRAMMY Award-winning country superstar and contemporary music icon, Kenny Rogers, will return Down Under in January and February for his Farewell Down Under Tour, which will include his final concerts in Australia and New Zealand ever.

The tour will begin in Sydney on January 23, 2015; followed by shows across the country in Tamworth, Newcastle, Melbourne, Launceston, Gold Coast, Townsville, Perth and Adelaide; then a concert in Christchurch, New Zealand before concluding the tour in Hamilton, New Zealand, on February 15, 2015.

While the concerts scheduled in January and February 2015 will be Rogers’ final performances in Australia and New Zealand, the legendary vocalist will continue to tour in other parts of the world.

"For all of the traveling I've done around the world, Australia and New Zealand remain two of my favorite places to perform,” Rogers said. "When I was with the First Edition, we made this same trip several times, and no matter how many times I've gone, I've always loved the audiences Down Under. They have a great sense of humor, and they've always treated me with such great respect, so for that, I say thank you.”

Since his sold out 2012 visit to Australia and New Zealand, Kenny has been honored with an induction into the American Country Music Hall of Fame and the Willie Nelson Lifetime Achievement Award – his sixth Country Music Association Award. Previous prestigious accolades include three Grammy Awards, eighteen American Music Awards, eight Academy of Country Music Awards and sales of more than 120 million - one Diamond, twenty Platinum and thirty two Gold albums, making him one of the Top Ten Best Selling Male Artists of All Time, according to the RIAA.

Rogers’ music has always crossed boundaries and the hit maker is still making monumental cross-over appearances at some of the world’s most prestigious festivals up to this day. In 2013, Rogers made his first appearance at the largest outdoor arts spectacle, the Glastonbury Festival, playing to over 130,000 enthusiastic fans, and at Morocco’s world music, Festival Timitar. In 2012, the country legend was welcomed with open arms at Bonnaroo, where he performed his own set with surprise special guest Lionel Richie and later joined Phish on-stage as a surprise guest himself for a rousing version of The Gambler.

In addition, Rogers has earned a GRAMMY Award nomination and CMA Award nomination this year, along with longtime friend and collaborator Dolly Parton, for their new duet, “You Can’t Make Old Friends,” which is the title track of Rogers’ current critically acclaimed 32nd studio album released by Warner Bros. in 2013. The magical Kenny & Dolly reunion was only the third time in the studio together since their Real Love hit in 1985.

Rogers is an enduring artist with a distinctive voice, gift for storytelling and universal appeal. He has consistently sold out venues where he performs from a chart-topping catalogue spanning seven decades and including multiple hits such as The Gambler; Lucille; Coward of the County; Ruby Don’t Take Your Love To Town; Reuben James; Lady; Islands in the Stream; She Believes In Me; We've Got Tonight; Daytime Friends; Sweet Music Man; Through The Years; You Decorated My Life; Buy Me A Rose; I Can’t Unlove You; and many more.

As an actor, Kenny starred as Brady Hawkes in The Gambler - five films which became the longest running mini-series franchise on American television and another movie inspired by his hit, Coward of the County.

His autobiography, Luck Or Something Like It - A Memoir, was a New York Times Best Seller in 2012 and continues to receive stellar reviews. Rogers has also produced several books of photography and received an Honorary Masters of Photography from the Professional Photographers of America earlier this year.