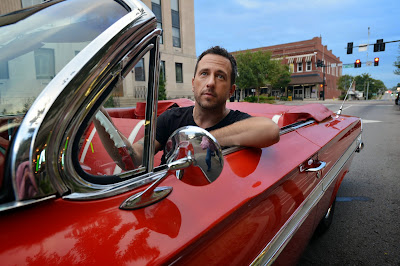 Filmed in the historic downtown square of Gallatin, TN, the setting aptly portrays the song's imagery of small town life. Produced by Gear Seven Creative (Taylor Swift, Justin Timberlake, Wade Bowen), the project is a one-shot music video, filmed from the perspective of a single camera in one long take. Fans can go alongside Hoge as he strolls through everyday life including a walk through the district’s tattoo parlor, a drive through the charming square in a classic Chevy car and a performance at the local pizza place.

“Middle Of America” exclusively premiered on ROLLING STONE COUNTRY. The driving tune is currently spinning on SiriusXM’s The Highway and climbing the Country music charts. "Middle Of America" is the lead single from Hoge’s forthcoming album produced by Marshall Altman, which is due in early 2015.

Hoge catapulted into the national spotlight with the release of his top-selling single “Strong.” Providing the musical backdrop for General Motor’s 2014 Chevy Silverado ad campaign, “Strong” has sold more than 200,000 copies and is featured on Hoge’s latest album NEVER GIVE IN. The celebrated project peaked at No. 4 on the Americana Airplay Charts and held steady in the Top 10 for fifteen consecutive weeks.

For tour dates and more information, visit www.WillHoge.com.
Posted by LovinLyrics at 11:11 AM