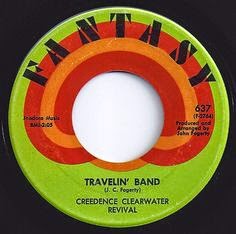 This Wednesday we’re heading back to the prevalence of Woodstock. While there is very little I love more than music and the music festivals of today, I imagine that Woodstock before it had been sullied with the absence of good music and the overabundance of hard drugs must’ve been an incomparable sight to see.  For all the books detailing it and the music surrounding it, the experience would have been another ballgame entirely.  Nevertheless it is an experience to dive into the music that was begat of that era.  The music that the subculture at the time had spawned tells a little of the story of what it would have been like then, hinting of the life and energy teeming from the microcosm.  Creedence Clearwater Revival is emblematic of this time, as their heyday as a touring band was solely in this time period.  Their music still lives on today with a little of their soul encapsulated in each song.  “Travelin’ Band” is a short song at just over 2 minutes but that’s all takes for you to be transplanted into another world.  It’s always the songwriter and artist’s ambition to convey an entire story in under 4 minutes and many have taken their inspiration from (writer and lead vocalist) John Fogerty and CCR but none have done it quite so well in such a short time.  An entire world that most are not privy to but so many aspire to explore.  Hectic flights, aching to get to the night’s hotel to crash on whatever bed’s there, too tired to care about the lost luggage, gotta get up and move!  Play a show, get the people dancin’ and movin’ and whoops they got a little out of control last night.  This was released in 1970 off of their “Cosmos Factory” album at the apex of their short-lived though prolific career.  “Cosmos Factory” also housed hits such as “Lookin’ Out My Back Door,” “Who’ll Stop The Rain” and “Long As I Can See The Light.”  This song, this band and John Fogerty of his own right are all so universally loved that even Garth Brooks cites growing up with them as an influence.  Though this song and band could be written about and lauded interminably, there is not a need to do so any further.

Posted by LovinLyrics at 6:45 PM