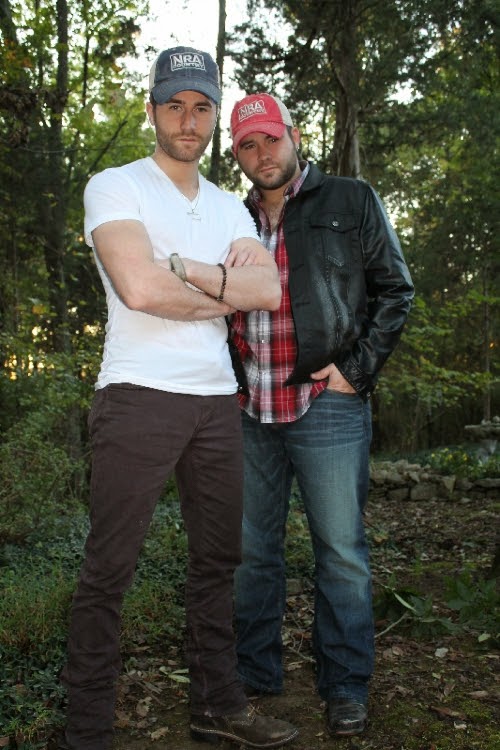 NASHVILLE, Tenn. (November 5, 2014) -- Country super duo and outdoor enthusiasts The Swon Brothers have been chosen as NRA Country’s Featured Artist for November. The announcement comes during a busy time, as the CMA nominated “Vocal Duo of the Year” recently launched their highly-anticipated, self-titled debut album.

“We grew up in Oklahoma, the heartland of our great country, where our dad first took us hunting and fishing and taught us to appreciate the outdoors. Now it’s our passion, it’s how we unwind and recharge. There’s nothing better than a holiday hunting trip followed by mom’s home cooking, spending time with family and some great country music. We are living our dream. We are The Swon Brothers and we are NRA Country.”

As part of the NRA Country promotion, fans can make plans to join NRA Country and The Swon Brothers on Veterans Day, Tuesday, November 11th at 7:00pm eastern for an exclusive online StageIt concert. The intimate show will feature a live Q&A and performances of music from the duo’s brand new album, including their debut hit “Later On,” and new single, “Pray For You.” The NRA Country Gives Back event is FREE and all artist proceeds from the tip jar will honor our nation’s veterans and be donated to Folds of Honor, a charity that “provides scholarships and assistance to the spouses and children of those killed or disabled in service to America.”

The top 3 fan tippers will receive an autographed copy of THE SWON BROTHERS album, as well as a merchandise item from the NRA Country store. The top tipper will also receive a personal phone call from the duo immediately following the StageIt show.

Don’t miss your opportunity to hear some great new music for a great cause with NRA Country and The Swon Brothers! Check HERE for information on how to reserve your free ticket!

Arista Nashville recording duo The Swon Brothers (Zach and Colton) just released their new single, “Pray for You,” the follow-up to their Top 15 debut single, “Later On.” Performing professionally since childhood – and honored with the Rising Star award by the Oklahoma Music Hall of Fame – the Muskogee, OK, natives first hit the national radar charming fans with their incredible sibling harmonies and fun-loving personalities as finalists on “Team Blake” in Season 4 of NBC’s The Voice. The duo’s self-titled major-label debut album released on October 14, 2014, produced by the Swons and Mark Bright (Carrie Underwood, Sara Evans), and featuring the singles “Later On” and “Pray for You.”

As an NRA Country Featured Artist, The Swon Brothers join some of country music’s biggest artists including Florida Georgia Line, Lee Brice, Love and Theft, Easton Corbin, Eric Paslay, Craig Morgan, Chase Rice and many more, in teaming up to celebrate their support of our brave men and women in uniform, appreciation for the great outdoors, and love of family.

Learn more and get NRA Country Connected at www.NRACountry.com! Fans can keep up with The Swon Brothers by visiting their web site at swonbrothers.com or by following them on Twitter @TheSwonBrothers.
Posted by LovinLyrics at 12:15 PM