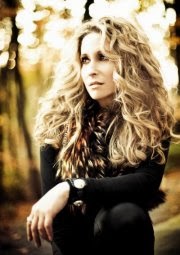 The interview with Heidi Newfield will air this coming Sunday, November 23, 2014 between 11am ET-3pm ET. The live show airs on Military Brotherhood Radio at http://www.militarybrotherhoodradio.com. Whiskey And Cigarettes is also re-broadcast on 50 syndicating stations, worldwide, multiple times throughout the week.  The interview will also appear on the November edition of the “Whiskey and Conversations” talk show, broadcasting in December on iheartradio and other outlets.

Heidi_Newfield_WikiHeidi Newfield is an American country music artist. She was lead singer, rhythm guitarist and harmonica player for the group Trick Pony, alongside Keith Burns and Ira Dean from 1996 until 2006, when she left in pursuit of a solo career. Newfield has begun her solo career on Curb Records, debuting in 2008 with the single, “Johnny & June.” This song, which peaked at No. 11 on the Hot Country Songs charts, is the first release from her solo debut album, What Am I Waiting For, which has produced a second Top 30 country hit, “Cry Cry (‘Til the Sun Shines).” She was nominated for 4 Academy of Country Music Awards in 2009, including Best Female Artist. In 2014, Ms. Newfield reunited with Trick Pony for a tour and upcoming album.  For more information, visit www.heidinewfield.com.