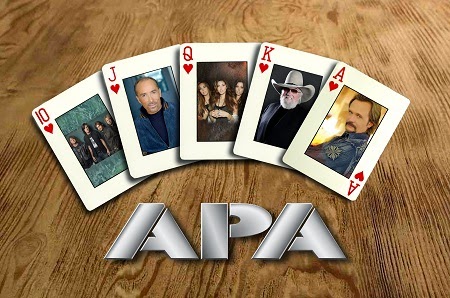 LAS VEGAS, NV (December 3, 2014) – APA’s Lee Greenwood, Travis Tritt, Charlie Daniels, Little Texas and country music trio, Michaelis, will be front and center at one of the most prestigious entertainment events of the year when all arrive in Las Vegas next week to help celebrate the Wrangler National Finals Rodeo.

Veteran performer Lee Greenwood will open things up with a performance of the National Anthem at the Rodeo on Sunday, December 7 at 7 PM. Later that evening, Greenwood will return to the stage at The Westgate Theater for the first of two shows that week, performing at 10 p.m. on both December 7 & 8.  Known for his 1984 classic hit, “God Bless The U.S.A.,” Greenwood’s Las Vegas history goes back to the late 60’s and 70’s where he performed with a local band and worked as a blackjack dealer.  In 1981, the California native burst on the scene with his first hit, “It Turns Me Inside Out,” and continued to rank the Billboard charts with hits like “She’s Lying,” “Dixie Road” and “Somebody’s Gonna Love You.”  A two-time recipient of the CMA’s Male Vocalist of the Year, Greenwood has also garnered two Platinum and three Gold albums over the course of his extraordinary career.

Country rocker Travis Tritt will bring his undeniable Southern Rock style and swagger with a headlining performance at The Golden Nugget’s Grand Event Center Tuesday, December 9 at 10 PM.  The CMA and Grammy Award-winning native of Marietta, Georgia, with seven Platinum albums to his credit is celebrating 25 years in country music.  Since first hitting the charts with the Top 10 hit, “Country Club,” Tritt has been one of the most dominant acts in the business with hit singles such as “Help Me Hold On,” “Anymore,” and “Here’s A Quarter (Call Someone Who Cares)” to name a few.

Country legend Charlie Daniels will perform at The Orleans Hotel and Casino at 8 PM on Friday, December 11, and Saturday, December 12. The North Carolina native who worked with Elvis Presley on “It Hurts Me” and collaborated with Bob Dylan on three of his albums, landed his own first hit with 1973’s “Uneasy Rider.”  An industry force ever since, Daniels has garnered three Gold and six Platinum albums over the course of his career with classic hits such as “In America” and “The Devil Went Down To Georgia,” which won the CMA’s Single of the Year.

Little Texas will be appearing at The Silverton Casino at 10 PM on Friday, December 12. Formed in Music City in 1988, the band quickly found favor with its high energy sound, making such singles as “My Love” and “God Blessed Texas” hallmarks of Country Radio to this day. Thirteen of their records have made the Top-40 on the Billboard Country Singles chart, and they have two Gold and two Platinum albums in their collection thus far.

The Michaelis trio will also have four evening performances at The Golden Nugget from December 9 through 12. Comprised of sisters Meagan, Mallory, and Madeline, Michaelis (which is also their last name) blend their native Texas twang with a Rock and Roll attitude that have made them a highly sought-after act on the live circuit.

Posted by LovinLyrics at 4:52 PM