THE TRADITION THAT IS COUNTRY MUSIC - THE GRAND OLD OPRY 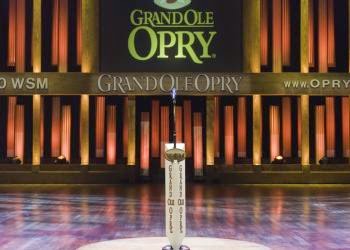 There are all kinds of things that make up country music - steel guitars, fiddles, cowboy hats, Wranglers, boots and buckles, but it wouldn't be anything without a place to showcase the music and the pinnacle of live stages for a country artist is the legendary Grand Ole Opry.

One simple radio broadcast that was heard in 1925 has now become known as one of the most hallowed and revered traditions of country music, the achievement that every artist strives for - to walk out onto that stage, stand in that historic circle where the boots of legends such as Patsy Cline, Hank Williams, Roy Acuff, Ernest Tubb, Loretta Lynn and countless others have stood, and perform to an audience of true country music fans, not a drunken crowd but an attentive crowd who is there because they respect country music and those who fought to get it heard. Country music is a religion of sorts and once you've played the Opry stage as an artist, you've gone to country music heaven. This is truly the highest honor an artist can receive. It's recognition from the genre and acceptance of  an artist's talent. It is country music's stamp of approval and it says "you've made it" and that years of hard work and paying dues has paid off for an artist.

The Opry exists as a testament and to honor country's history and to maintain the respect for the genre by showcasing the artists and music who have built their careers in country and those artists who are just starting out that have proven themselves to be "Opry worthy". Of all the venues and stages in Music City, the Grand Ole Opry is the one that tourists and fans flock to above all others, it's the #1 attraction in Nashville. The show is still broadcast live, just as it started, with a much larger worldwide audience. Thanks to today's technology, the Internet brings the Opry into your homes and work places via the internet at www.opry.com and www.wsm.com, in the car or in your home on Sirius XM Satellite Radio and on the free Opry smartphone app that allows you to take the music with you wherever you go so you can tune in and not miss a performance from some of country's biggest names.

Here are some quotes by some of country's most loved artists about the Opry:


" It began on the night of Nov. 28, 1925, when an announcer on Nashville radio station WSM introduced fiddle player Uncle Jimmy Thompson as the first performer on a new show called "The WSM Barn Dance." Now, more than 80 years later, the show Hay started is still going strong. Along the way, it has launched countless country music careers and led the way for Nashville to become Music City." - Brad Paisley

"The Grand Ole Opry, to a country singer, is what Yankee Stadium is to a baseball player. Broadway to an actor. It’s the top of the ladder, the top of the mountain. You don’t just play the Opry; you
live it.”  - Bill Anderson

"It’s such an honor. I still get, I guess, starstruck, at the Opry. Because there’s so much history here and there are so many legends that are still walking around backstage, so it’s really an incredible, incredible experience for somebody like me that grew up listening to all of them. And to be able to
share the stage with them is something that I treasure."  - Kellie Pickler

“You think about people like Hank Williams, who stood on that spot of wood, and Mr. Acuff, and, of course, George Jones. And just about anybody you can think of who has made country music has been on that stage. That’s what makes you so nervous – to think about the historical part of the
Opry and how it’s played such a part in country music." -  Alan Jackson

"As a little boy, I used to listen to the Grand Ole Opry on the radio and dream of belonging. All other achievements pale in comparison and for the first time I feel like I really belong to the country music family. I’m so overwhelmed with the emotion of that little boy’s dream becoming reality.” - Joe Diffie

"Until I started playing the Opry, I didn’t realize how powerful it is. The first time I played it I felt a real power – the power of heritage, of tradition, of the written word. It’s a great forum." - Hal Ketchum

"My dad always said, ‘you know, no matter what awards you win, you haven’t made it until you get to play the Opry and you’re a part of the Opry.’" - Eddie Montgomery


"Playing the Opry is one of the few performances in this world that will make my knees shake a little bit."  - Travis Tritt

"You didn't get on the Opry back (in the early days) for singing a song or having a hit number. They didn't ask you if you ever recorded. They didn't care. You had to be a showman. The only way you could get on was to have something to show and prove it. My first night I did the "Great Speckled Bird," and ... the audience stood and cheered and cheered. I tried to leave but they brought me back two, three times." - Roy Acuff

"Country music is always changing but the Opry is always there to serve as a lighthouse for what country music really is. The past, present and future is all encompassed by not only the physical structure of the building but also the radio show." - Dierks Bentley

"First time I walked out on the Opry stage, Vince Gill was there. He kind of 'daddied' me through the whole thing. My knees were knocking. I walked out there, and I was literally shaking. They say it's the spirits or the ghosts. And out of respect for that whole establishment, I was really really nervous." - Randy Houser

Posted by LovinLyrics at 3:38 PM