WAY BACK WHEN WEDNESDAY - "WHOSE BED HAVE YOUR BOOTS BEEN UNDER?" - SHANIA TWAIN 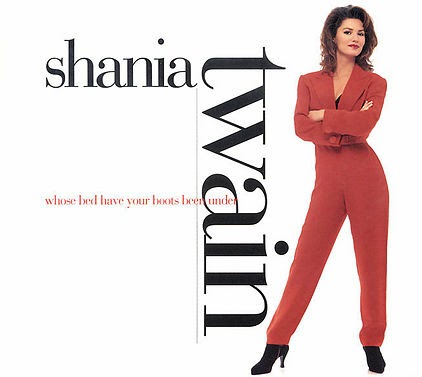 As it’s the first “Way Back When Wednesday” of December I figured we needed a song that lit a fire within us. Of course, Shania Twain was the logical first choice, as she made such a splash with her first racy music video of the 90’s. Blatantly displaying mid-riff as she did in “Any Man Of Mine” was considered scandalous and simply not done in country music. The risky move she made paid off largely and she backed it up with immense vocals, catchy songs and songwriting that displays both unusual expertise and longevity. Her 2nd studio album “The Woman In Me” burst onto the scene in 1995 containing both “Any Man Of Mine” and “Whose Bed Have Your Boots Been Under” which was the lead single off of it. Co-written by Shania Twain and her then-soon-to-be husband/producer Mutt Lange, the single shot up in the charts with alarming alacrity. “Meteoric rise” and “flash in the pan” were terms bandied about to speak of Twain’s promise and career thus far. Critics were not impressed by her sexy sales and her unabashed zest to include a younger audience in her music and career. They figured that she wouldn’t last and they were wrong. Some of her greatest hits have come off of that album and she only went “Up!” from there. Still loved by millions today, she is ubiquitous when it comes to 90’s, 00’s, or any country music since she made her memorable debut. “Whose Bed Have Your Boots Been Under” epitomizes catchy and is a cheating song. An unusual combination especially at the time, the song asks the ever-present query of where do you lay your head or rather those boots when they’re not here? The way this song is crafted is a testament to the writing skill of Twain and Lange, the performance skill of Twain and the backup vocalists. Rarely do cheating songs energize as thusly as this one does so may this curious oeuvre get you up and moving this cold December day!

Posted by LovinLyrics at 7:51 PM

Email ThisBlogThis!Share to TwitterShare to FacebookShare to Pinterest
Labels: alyse smith, articles, contributor, shania twain, video, WAY BACK WHEN WEDNESDAY, whose bed have your boots been under