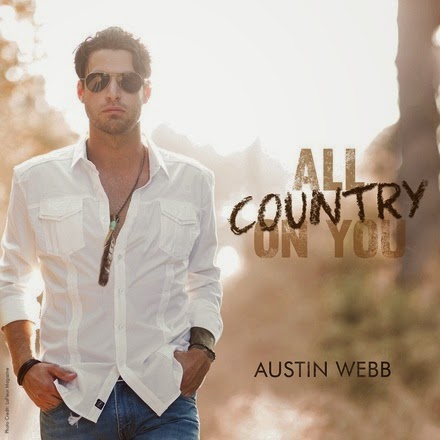 ​Nashville, TN (January 6, 2015)-- Streamsound Records' Austin Webb kick-starts 2015 with his breakout single, "All Country On You."  With 30 monitored stations on board, the new single has garnered the No. 1 Most-Added spot at country radio. "All Country On You," produced by Grammy award-winning Byron Gallimore and co-written by Mark Irwin, Josh Kear and Chris Tompkins, the same songwriters who wrote the radio hits "Before He Cheats” by Carrie Underwood and Tyler Farr’s “Redneck Crazy,” is available at all digital outlets and can be downloaded here: http://smarturl.it/ACOYaw

With its catchy lyrics and upbeat tempo, the empowering new single has received high praises from country music critics.


"It’s hard not to predict that 'All Country On You' can become one of the breakout hits of 2015." --Roughstock

"The ladies will love this tune, as it’s an anthem to the feisty women of the world."
- CountryMusicIsLove, 2015 Ones To Watch Edition

"'All Country on You' is Austin Webb's best single to date."
- Digital Journal

"...the undeniably appealing melody is one that will be stuck in your head at first note." -
The Daily Country

"Austin Webb has put out very solid music with every single thus far, however with this catchy new release he makes an even bolder statement that demands that radio gives him a shot…"
- One Stop Country

"A really fun tribute to all the strong and feisty women out there."
- For The Country Record

"The whole song’s set up to be one clever line after another, a how-to that’s upbeat without being vapid or caustic."
- Lovin' Lyrics

“'All Country On You' is a fun, sing-a-long anthem that will find country fans cheering for more."
- Country Music Matters"Artists to Watch 2015"-- Country Music Rocks


“The verses are succinctly stacked against themselves, and when the chorus comes each time, you can’t do anything but sing along at the top of your lungs.”
- The Nashville Gab

Austin Webb is currently on a nationwide radio tour in support of the new single.
For up-to-date information, visit www.austinwebb.com