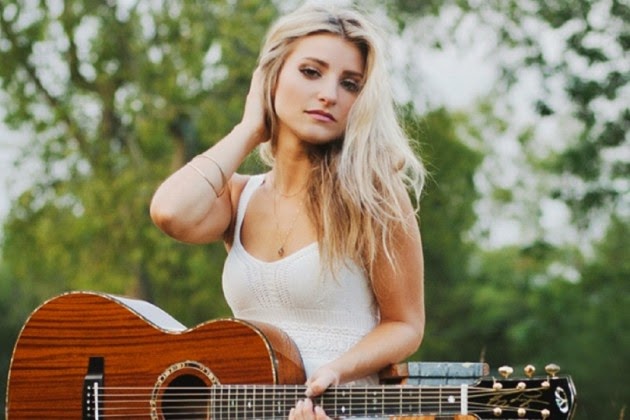 We love getting to know new artists, it's what we're here for. We like to bring them a little closer to potential fans and keep them close to fans they've already won over. We recently interviewed new artist, April Kry. If you're a Sirius XM The Highway listener, you've already heard her debut single, "Fireflies" and she hopes to hit the same stride soon with country mainstream. She's also had her music featured in shows such as MTV's "The Real World" and Oxygen's "Love Games". Her video for her song "Beauty Queen" has been featured on CMT.com.

Lovin' Lyrics: Can you give a little self descriptive bio? How did you get started? How long have you been performing?

April Kry: I started singing in the church with my dad who was the worship leader there. I guess you could say he passed those musical genes along to my sister and I! I've been performing for as long as I can remember. My mom would book me at any and EVERY function/festival/contest growing up, so I feel like the stage is my home.

Lovin' Lyrics: You just released your debut single, "Fireflies". Tell us about the song itself, did you write it? What's the single about? How would you "sell it" to a potential new fan?

April Kry: As soon as I heard the song, I immediately had a connection with it because it talks about falling in love for the first time. It brought me back to those precious moments I'll never forget, and that's what I'm hoping it will do for the listener as well! It's one of those "love anthem" songs you could easily sing along to on a car ride with your girlfriends! The song was written by the extremely talented- Jennifer Pappas, JP Rende and Kathryn Rende.

Lovin' Lyrics: Are you planning on releasing a full length CD or an EP?

April Kry: Right now I have an EP in the works, but I'd love to do a full length in the near future, for sure!

Lovin' Lyrics: In the "boys club" of country music, do you find it more difficult being a female trying to get your music heard?

April Kry: It's definitely more of a challenge, but I think the women of country music are rising up this year. Look at all these amazing newcomers like, RaeLynn, Kelsea Ballerini, and Mickey Guyton! Country needs some strong female voices, and I hope to be one of them!

Lovin' Lyrics: What advice would you give to a new female artist just getting started?

April Kry: My dad always told me to be true to my roots and I think that's really important. Don't try to be somebody you're not just to please people. The fans know when something is authentic and latch onto it.

Lovin' Lyrics: Have you opened for any big name artists? What has your favorite performance been so far?

April Kry: That's my goal for this year! I'd love to be an opening act for a big artist. Performing live is what I love the most. I have to say my favorite performance I've ever done was singing at the legendary Apollo theater in Harlem. It was one of the most humbling and exciting performances I've ever done because of the all the prominent names that had performed on that stage before me.

Lovin' Lyrics: Have you had any really embarrassing moments as an artist?

April Kry: Ha ha...oh yes. There is one particular moment that I'll never forget. I was rehearsing a song for a musical I did in high school. The whole cast was there, and I had to belt this high G, which is insane...but I decided that I would go for it and I guess i didn't get enough air so...I fainted in front of everyone. It was pretty mortifying.

April Kry: To me, its simply touching the lives of others in a positive way.

Lovin' Lyrics: Tell us something about yourself that others might find surprising.

April Kry: I'm a bit of a perfectionist...especially when it comes to my music :) It's a good and a bad thing, I guess!

Lovin' Lyrics: How can fans find you on social media and do you handle your own engagement?

April Kry: They can find me on Facebook, Twitter & Instagram...all the links to those outlets are on my website - www.AprilKry.com and yes, I love engaging with my fans. Without their support I wouldn't be where I am today and I'm forever grateful for that. :)