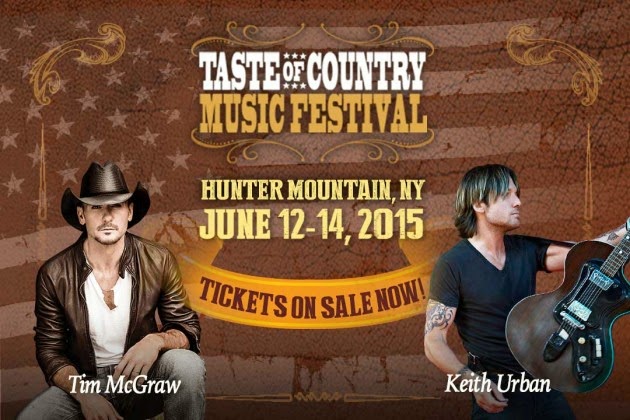 “In just the third year of the Taste of Country Music Festival, we have been able to deliver a entertainment lineup to our fans that we think is the strongest of any major country music event in the nation this summer, with the possible exceptions of our own festivals in Minnesota and Colorado, WE Fest and Country Jam,” said Dhruv Prasad, Executive Vice President, Live Events, Townsquare Media Inc. "We couldn’t be more excited to see everyone at the Mountain this year – it will be the best yet.”

Information on tickets, camping, VIP packages, hotel accommodations, directions and more are available online at www.tasteofcountryfestival.com. New this year is an off-site car and RV camping option at Bear Creek, located a few miles from the festival grounds, with camping prices starting at $89.  The off-site camping passes will come with free shuttle service to/from festival grounds.

The Taste of Country Music Festival is the first and only 3-day country music camping festival in the Northeast. The festival features world-class entertainment, camping in the renowned terrain of the Catskills, outdoor recreation, top-notch food and beverage service and luxury mountainside accommodations unique to host Hunter Mountain. The festival has already established itself as a must-do for country music fans because of the powerhouse list of artists that perform. The 2014 Taste of Country Music Festival's star-packed lineup included Brad Paisley, Dierks Bentley, Brantley Gilbert, Hank Williams, Jr., Randy Houser, Chase Rice, Thompson Square and many others.  Over 40,000 fans attended the 2nd annual Taste of Country Music Festival to see the superstars, legends and hottest rising newcomers in country music.

Posted by LovinLyrics at 4:21 PM