SINGLE REVIEW: "MY BABY'S GOT A SMILE ON HER FACE" - CRAIG WAYNE BOYD

SINGLE: "My Baby's Got a Smile On Her Face"
ARTIST: Craig Wayne Boyd
REVIEWER: Alyse Smith
Follow Alyse on Twitter at @ASmith1300 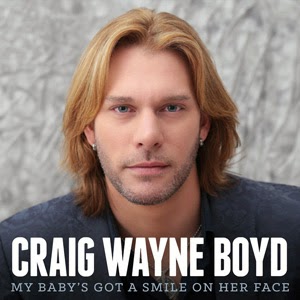 Purchase "My Baby's Got a Smile on Her Face" on iTunes

Craig Wayne Boyd has been drumming up attention long before his debut single “My Baby’s Got A Smile On Her Face” - he was not only a contestant on "The Voice", he was also the "Comeback Kid" after being the sought after prize in Gwen Stefani and Blake Shelton's game of on-air Tug-Of-War.  First to Blake, then to Gwen, then back to Blake.  With Blake Shelton (And damn near all of Nashville) backing him, Craig Wayne Boyd has won "The Voice" and been let loose with his own music.  After a decade of waiting, writing and singing with little success he finally found a way to get people’s attention. I’m so very glad he has because listen to that voice!  His debut single, “My Baby’s Got A Smile On Her Face” was actually a song given to him as a gift from Blake, who had been holding out for just the right voice to do it justice and Craig's done more than done it justice, he made country music history when the single debuted at #1 on the Billboard Hot Country Songs chart second only to this guy named GARTH BROOKS! It's a song about satisfying his lady love.  Leaving just enough to the imagination, he talks about that suggestive smile his girl’s throwing him to let him know that sleep deprivation for the best possible reason is going to happen tonight and again the next night.  There’s no deep, hidden meaning in this song, but Craig sounds so good singing it that’s perfectly okay.  Craig’s one of those “phonebook” guys.  The “I’d listen to him sing the phonebook” guy that everyone swoons over or wants to be, that’s him.  They’re a rarity but the multi-talented Craig Wayne Boyd is definitely one of them.  A songwriter, singer and definitely not hard on the eyes with a hypnotic stage presence he’s emblematic of the phrase “Triple Threat.”  When Craig Wayne Boyd sings, his baby ain’t the only one with a smile on his face, nor may she be the only one thinking that song’s for her.  A whole room of captivated, swooning to the crooner people are what’s to be expected whenever he sings.  He’s touring near daily from now until October, so don’t sleep on this one and be sure to catch a show! He will definitely be leaving a smile on a lot of faces for years to come!