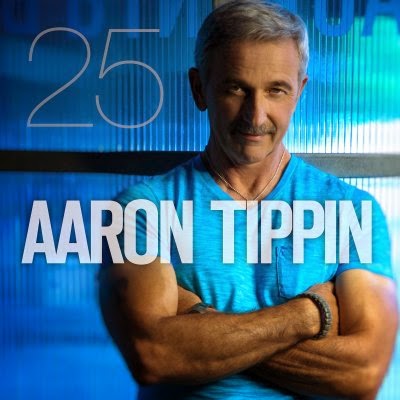 Nashville, Tenn. (February 10, 2015) - Twenty-five years is a huge career accomplishment, especially in the music business. Aaron Tippin, who marks his silver anniversary as a recording artist this year, is celebrating his career milestone by releasing all-new music. On Monday, March 2, 2015, the "Hardest Workin' Man in Country Music" will release Aaron Tippin 25 (Nippit Records) a collection of recordings that reflects on the old and shines with the new. The two-disc, 25-track album features freshly recorded versions of ten of Tippin's biggest career hits, as well as 15 new songs. This anniversary compilation marks the first time Tippin has released new music in over six years.

"I had so much fun writing and recording this stuff," says Tippin. "It's always great to get to sing the old hits which have brought me to where I am now but it's also energizing to do new songs. I co-wrote with some awesome writers for this project."

Fans can expect to hear new versions of Tippin classics including, "You've Got to Stand For Something," "There Ain't Nothin' Wrong With The Radio," "Working Man's Ph.D," "Kiss This" and "Where The Stars And Stripes And The Eagle Fly." New songs on the album include many that were co-written by Tippin, such as "I'm A Mechanic," "God's Not Through With Me Yet," "Real People," "Without A Kiss," "That Makes Me Thirsty" and "Easier Unsaid Than Undone," a duet he sings with his wife Thea and written by the original "Kiss This" writing team of Aaron, Thea and Philip Douglas.

"I even recorded five songs that you'd probably never expect to hear me sing," notes Tippin. A few of the more surprising songs Tippin included on the compilation are Frank Sinatra's "The Way You Look Tonight" and the Georgia Satellites' "Keep Your Hands To Yourself." "My son Tom sings with me on Al Green's 'Let's Stay Together' and man, I'm proud of that!" he says. "And I put a gospel tune on there that I wrote over 30 years ago and I had the whole Tippin family sing on it. It's called 'The House Of The Lord.'"

On 25 years gone by, Tippin reflects and says, "I think about it and go, 'Wow. What am I doing still here?' I am the luckiest hillbilly that ever lived."

Aaron Tippin 25 will be available for purchase online exclusively at www.aarontippin.com.

1. You've Got To Stand For Something

2. There Ain't Nothin' Wrong With The Radio

7. That's As Close As I'll Get To Loving You

10. Where The Stars And Stripes And The Eagle Fly

5. That Makes Me Thirsty

8. You Make Me Beautiful

11. Keep Your Hands To Yourself

14. The Way You Look Tonight