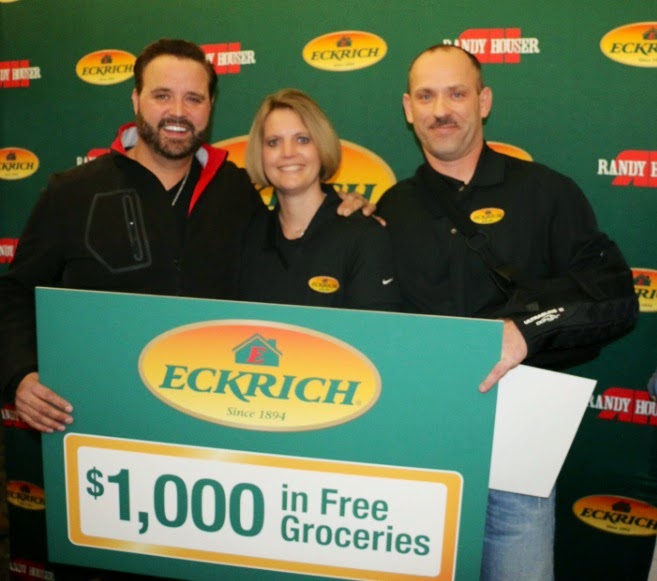 LISLE, Ill. - (February 12, 2015) – Powerhouse country music vocalist Randy Houser and Eckrich® surprised James Jackson and his family with a special meet-and-greet opportunity and $1,000 in groceries prior to Houser’s performance atVan Andel Arena in Grand Rapids, Michigan on Tuesday, Feb. 10. The show was the first stop for the 2015 leg of Luke Bryan’s That’s My Kind of Night Tour, on which Houser is direct support.

Jackson and his family were greeted by Houser’s management before the show and escorted backstage to meet the country singer who surprised the family with a gift card for $1,000 towards the purchase of groceries, courtesy of Eckrich. Houser then took the stage and wowed the crowd with a hit-filled set that included the No.1 smashes “How Country Feels,” “Runnin’ Outta Moonlight” and “Goodnight Kiss” as well as his current Top 5-and-climbing single, “Like A Cowboy.”

The gift of groceries and the opportunity to meet one of country music’s most popular entertainers are part of the Eckrich “Operation Inspiration” campaign, which honors, thanks and supports military families through its partnership with Operation Homefront, a national nonprofit that provides emergency financial and other assistance to the families of service members and wounded warriors. Since last year, Houser has been helping Eckrich pay tribute to military families by hosting and honoring them at his concerts. Houser has long supported the military and their families, and has performed for service members stationed in Iraq and most recently at an Operation Homefront Village in Gaithersburg, Maryland.

“Any time I can spend some of my time with a military family is special for me,” commented Houser. “These families have sacrificed so much so I can go out and perform and do what I love. It was great to meet the Jackson family, hear their story and have them enjoy the concert courtesy of my partner, Eckrich.”

Now in its fourth year of partnership with Operation Homefront, Eckrich has donated more than $750,000 to the charity.

“Like Eckrich, Randy is a great supporter of our military families,” said Chuck Gitkin, vice president, marketing, innovation and R&D for John Morrell Food Group. “We are thankful for their service and are honored to surprise them with an exciting experience backstage with Randy Houser and $1,000 in free groceries.”

For more information about Eckrich and “Operation Inspiration” please visit www.facebook.com/EckrichMeats.
Posted by LovinLyrics at 2:13 PM