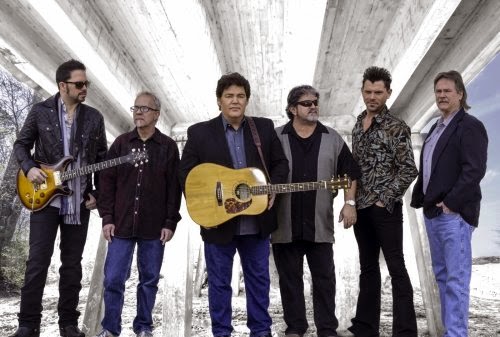 Nashville, Tenn. (February 12, 2015) - After a near 18-year absence, the original voice of Shenandoah, Marty Raybon, is officially back in the band.  Since announcing his return last fall, Shenandoah and Raybon have performed a handful of dates, leaving concertgoers in awe.  Today, Shenandoah announced dates for their 2015 tour, Reloaded With Marty Raybon.

"We are so excited to see the reaction so far to having Marty back with us," notes Shenandoah's Mike McGuire.  "Smiles are big, seats are full and autograph lines are long.  It's like country music fans are starved for real country music these days.  At least that's what they are telling us.  And we are happy to take them back in our time machine!"

Raybon adds, "The crowds have been unbelievable.  Packed and loud.  It seems to me that they've missed hearing the music as much as I have.  The excitement is right in front of us and that's what makes us want to make sure they leave entertained and glad they came.  It's good to be back with the boys!"

Shenandoah's Reloaded With Marty Raybon tour kicks off this March.

For more information on Shenandoah, visit www.shenandoahband.com.
Posted by LovinLyrics at 5:24 PM