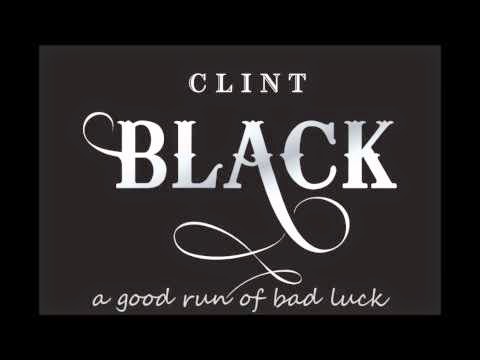 With the blustery winter out there, to put it mildly there is nothing I would rather write than a “Way Back When Wednesday” of Summer’s Comin’. However, given that it is snowing sideways in a good number of places including here, that would seem to be crueler than I am. Perhaps next week, as this week the featured song is none other than “Good Run of Bad Luck” by Clint Black. Released in 1993 off of his “No Time To Kill” album, “Good Run of Bad Luck” was written by Texan singer/songwriters Clint Black and Hayden Nicholas. A songwriting duo that has stood both the test of time and has spawned over 100 songs together. They met in 1987 and started writing, first getting together for Clint’s album “Killin’ Time” and they’ve only soared higher since. A song that most are familiar with, “Good Run of Bad Luck” is a quite visibly song about luck. His, hers and the man currently lucky enough to be with her. If things just going a little bad for them, they’d start going great for him. He’ll take that gamble, as “7 come 11 and she could be mine, luck be a lady and she could be mine.” He’s confident that he’ll win the hand, both of the lady and the cards that he’s been dealt. An excellent song and an interesting video to improve the dreaded cold days of your winter.

If you're on social media, follow Clint on Twitter at @Clint_Black and on Facebook at Clint.Black.
He's great with his fans and handles his accounts personally.

Posted by LovinLyrics at 7:38 PM