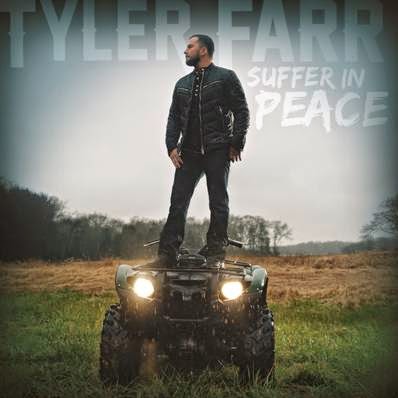 Nashville, TN – Columbia Nashville’s Tyler Farr is set to release his new album, SUFFER IN PEACE, on April 28. Suffer in Peace is the Missouri native’s sophomore album and sharing the production duties are Jim Catino and Julian King; both of whom produced Farr’s debut album Redneck Crazy which released in 2013 and landed at #2 on the Country Albums Chart and #5 on the Billboard Top 200 Albums Chart. Starting today pre-orders for the physical version of Suffer In Peace is available at Amazon Music.

Suffer in Peace promises to be an album that continues Farr’s trajectory of being a force to be reckoned with in country music. The debut single from Suffer in Peace, “A Guy Walks Into a Bar” is proving to be the whisky-soaked vocalist’s third hit song; climbing inside the top-20 on the Billboard Country Airplay chart.

Farr has created a name for himself for songs that show a darker side of heartbreak and loneliness from a sincere place that Farr knows well. That theme is one that Farr continues to come back to with his songs on Suffer in Peace. With that in mind, the title track, “Suffer In Peace,” looks to be an early contender as one of the emotional standout’s from the anticipated album. Rolling Stone Country labeled the song as being “full of soul-barring lyrics and traditional country phrasing” in the Country Goes Back To Basics (All Year) section of their 20 Reasons To Love This Year.

Farr has been road testing the songs that make up Suffer in Peace out with Brantley Gilbert on Gilbert’s Let It Ride Tour at the end of 2014 and currently performing them on Jason Aldean’s Burn It Down Tour.

In addition to the Burn It Down Tour, Farr has his own headlining dates leading up to and following the release of Suffer in Peace. For a full list of tour dates and appearances, visit Tyler Farr’s website here.