Roberts’ Debut EP, Dream About Me, Available on iTunes March 24 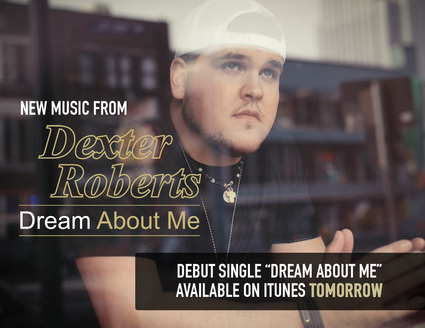 PERSONAL NOTE: Fantastic to see Ash Bowers, a great artist in his own right, as a songwriter on this CD and that they chose to cut his single (and my favorite), "Heaven Is A Small Town." What a wonderful song!

Roberts commented on his radio debut, saying, “Writing this song was an amazing experience. I had the opportunity to write with songwriting legend Don Goodman and the production process was mind-blowing. Getting to watch this song come to fruition was a dream come true!”

Roberts will release his debut EP, Dream About Me, on March 24. Produced and co-written by Grammy-nominated writer/producer Erik Nelson, the four-track EP features three tracks co-written by Roberts with additional writer credits, including songwriting heavy-weight Don Goodman (“Ol’ Red” by Blake Shelton, “Feelins’” by Loretta Lynn and Conway Twitty, “Ring on Her Finger, Time on Her Hands” by Reba McEntire, “Angels Among Us” by Alabama).

Goodman commented of Roberts, “It’s a thrill to work with such an exciting young artist with a great voice and tremendous writing instincts.”

Dream About Me Track Listing:

As a self-taught musician who plays guitar, bass, banjo, mandolin and keys, music has been a part of Roberts’ life since he was a toddler. At age 5, his grandparents bought Roberts his first instrument – a red plastic guitar. He instantly fell in love with the guitar and became determined to learn the craft. Roberts grew up working the family farm in Fayette, Ala. where he would spend his days and nights perfecting his craft and playing sold-out shows for the cattle he tended to while working the land. When Roberts learned that the “American Idol” bus was making a stop in nearby Tuscaloosa, Ala., he stood in line with thousands of hopefuls to try his luck on the famed show.

After starting audition day off with two flat tires and borrowing the Roberts family’s “little blue car” (a worn-out Nissan) to get to the audition, he was determined to give the best performance of his life. Thousands of hopefuls showed up that day and ultimately only five would be asked to continue on in “American Idol: Season 13.” That day, not one, but two fellow competitors had instrument issues and Dexter gladly let both of them use his guitar to audition – ironically, all three of them would continue to the next round.

Roberts, who quickly became a fan favorite after grabbing the attention of Country heavyweight and “American Idol” judge, Keith Urban, who called Roberts “the real deal,” has recently signed a recording contract with First Launch Records.
For more information on Dexter Roberts, visit his official website at www.ImDexterRoberts.com and follow him on Instagram, Twitter and Facebook.
Posted by LovinLyrics at 11:11 AM