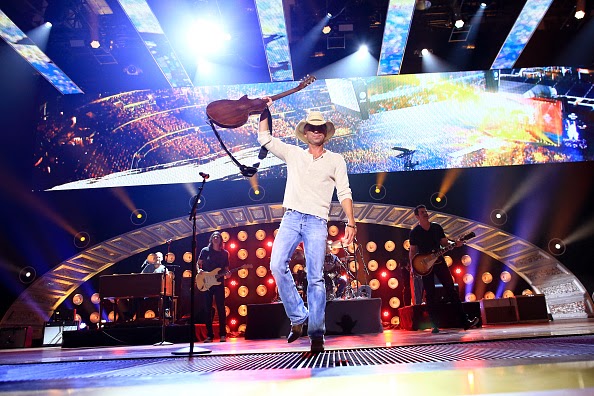 Nashville, Tenn. (March 27, 2015): Kenny Chesney – clad in a dark sleeveless Grace Potter and the Nocturnals t-shirt – hit Nashville like a house a-fire. From the opening of the New Orleans funeral drum corps/street preacher noir film until the last ringing note of Joe Walsh’s hard-charging “All Night Long,” the East Tennessean showed how much he missed the fans since he walked offstage after two sold-out nights at Foxboro’s Gillette Stadium in 2013.

In a 36 song set that took 13 songs to get to a ballad, the 8-time Entertainer of the Year relentlessly moved across the stage, held the center, engaged the fans and delivered the kind of impassioned performance that made Chesney the only Country Artist on Billboard’s Top 10 Touring Acts of the Last 25 Years. Opening with “Drink It Up” from his 13th #1 The Big Revival, the show was a romp featuring not just his hits but many of his guests’ best loved songs.

Taylor Swift took the stage as the living embodiment of everything Chesney’s girl-with-a-dream “Big Star” represents, singing hard and showing off an explosive power in her delivery. As the song swung into its final verse, the pair swept a young girl out of the audience and with a nod to the future, let her help sing the final chorus.

That spirit of friendship permeated. Grace Potter emerged from the shadows, providing yearning harmonies on the current single “Wild Child.” She would return to kick-off the night’s six-song encore, just Chesney and a pair of guitars on the yearning “You & Tequila.” Uncle Kracker reprised the pair’s six week #1, “When the Sun Goes Down,” then performed his breakthrough “Follow Me” and the 28-week Adult Contemporary #1 cover of Dobie Gray’s “Drift Away.”

There were redneck songwriters – David Lee Murphy, who wrote “Living In Fast Forward,” “Pirate Flag,” “Flora-Bama,” performed his #1 “Dust on the Bottle,” as well as “Party Crowd” from his gold 1994 debut Out With A Bang. There were Rock and Roll Hall of Famers – Joe Walsh, who not only led the crowd in singing “Happy Birthday” to the headliner, but scorched “Rocky Mountain Way,” “Life in the Fast Lane,” “All Night Long” and “Life’s Been Good” with a ferocity that scalded the AOR classics.

There were nakedly intimate moments: Chesney and guitar on his signature “Old Blue Chair,” alone in a spotlight on the thrust with only Wyatt Beard on keyboards for the multiple week #1 “There Goes My Life.” For “Anything But Mine,” the paean to a summer love, so many fans held lighters and cell phones with flames aloft, the crowd was almost brighter than the stage.

With two sold-out Bridgestone Arena shows starting his The Big Revival 2015 Tour, Chesney is already leaning into summer with a vengeance. His Corona Light sponsored tour finds him playing 55 dates, including 22 stadiums between now and the end of August – and it looks like the man The Wall Street Journal called “The King of the Road” has no plans to secede his crown.

“That crowd was awesome,” Chesney enthused. “Talk about the greatest birthday present! Hearing them sing those songs back at me: it’s why the No Shoes Nation rocks. Nobody loves music like they do, and I am always amazed by how hard they throw that energy at us.”
Posted by LovinLyrics at 1:32 PM