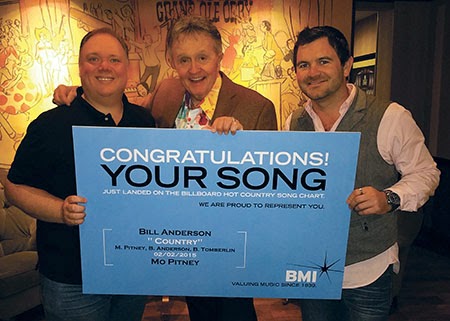 NASHVILLE, Tenn. (April 30, 2015) – With the recent chart success of “Country” from Curb recording artist Mo Pitney, the name of Bill Anderson once again enters the Country Music history books. The success of the track gives Anderson the distinction of having an entry on the country charts for seven straight decades – a record held by no other songwriter in the history of the format. The success is yet another example of Anderson’s enduring talent. Since the late 1950’s the South Carolina native has enjoyed being one of the most versatile artists to ever call Music City home, with success as a singer, songwriter, TV host, radio personality, and author to his credit, and Webster Public Relations is excited to announce that Anderson has signed with the company for media representation.

His first major success was writing “City Lights” for Ray Price in 1958 – when he was still a teenager. His writing career has evolved over the years, with his compositions ranging from “Saginaw, Michigan” (Lefty Frizzell), “Once A Day” (Connie Smith), “I May Never Get To Heaven” (Conway Twitty) all the way to modern-day classics from Kenny Chesney (“A Lot Of Things Different”), Brad Paisley and Alison Krauss (“Whiskey Lullaby”), and George Strait (“Give It Away”). Anderson stands alone as the most-awarded songwriter in Country Music history.

As an artist, Anderson signed with Decca Records in 1958, and immediately hit the Billboard charts with “That’s What It’s Like To Be Lonesome.” Future hits included the Pop crossover “Still,” “Mama Sang A Song,” “Where Have All Our Heroes Gone,” “Quits,” and 1978’s “I Can’t Get Any Longer,” which became one of the earliest fusions of Country and Disco. His career triumphs earned him an invitation in 1961 to join the Grand Ole Opry, in addition to elections to the Nashville Songwriters’ Hall of Fame and the Country Music Hall of Fame. He was also the first Country artist to receive the BMI Icon Award in 2001.

One of the earliest performers to use television to his advantage, Anderson hosted his own syndicated series in the 1960s and 1970s, and also co-hosted the ABC-TV game series The Better Sex (with Sarah Purcell), as well as the 1980s’ series Fandango on The Nashville Network. Working his way through college as an on-air radio personality, he has since hosted programs on TNNR (The Nashville Network Radio) and XM Radio. In 1989, the singer put his story on paper with the best-selling autobiography Whisperin’ Bill, as well as the 2003 follow-up I Hope You’re Living As High On The Hog As The Pig You Turned Out To Be. An updated version of his autobiography is being readied for release later this year or in early 2016.