Platinum-Selling Country Artist Burning Up The Road With Luke Bryan 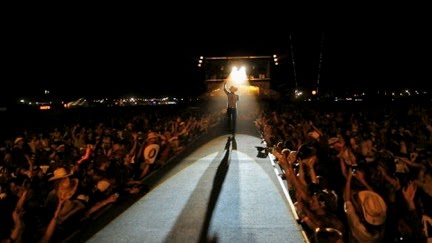 NASHVILLE, TN (April 30, 2015) – Dustin Lynch will debut the brand new music video for his blazing single “Hell of a Night” exclusively on Entertainment Tonight Online today, Thursday (4/30). Following the premiere, the video will be available across all media partners tomorrow (5/1).

Fans can catch Lynch out on the road with upcoming dates in Grand Forks, ND (5/8), Sioux Falls, SD (5/9) and Lewiston, ID (5/13) and a behind-the-scenes glimpse into his tour life with the “On The DL” webisode series.

The Top 30-and-escalating “Hell of a Night” is the second single from his latest album WHERE IT’S AT (Broken Bow Records) and follows the multi-week #1, GOLD-certified title track.

Since releasing his PLATINUM debut single, “Cowboys and Angels,” Lynch has launched on to the country music scene. Racking up over 25 million views on YouTube/VEVO, soaring to #1 on the MTV Music Meter and selling 2.4 million digital singles, he brings a fresh combination of traditional influences and edgy intensity to the genre. Producers Mickey Jack Cones, Brett Beavers and Luke Wooten showcase his progressive sound throughout his sophomore album, WHERE IT’S AT, which debuted at #1 on the iTunes Country Albums Chart upon release and has tallied over 750,000 tracks sold to date.

Lynch’s WHERE IT’S AT is now available on iTunes.
Posted by LovinLyrics at 11:27 AM