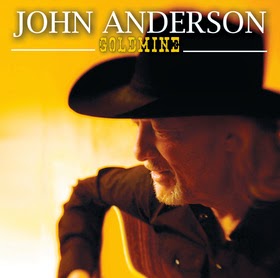 One of Country music’s finest, John Anderson, will release his new album, Goldmine, on May 26. Released on his own record label, Bayou Boys Music, the 13-track collection of original material features authentic lyrics and Anderson’s signature sound. The award-winning and hall of fame songwriter wrote or co-wrote 12 of the album’s 13 tracks.

Goldmine is an album that was cut with the artist in complete control. Anderson produced the record with long-time friend and producer Joe Spivey.

“With Goldmine, I thought, first off, I’m going to take my songs into the studio and make a record like I think it ought to be made, without all those other influences,” Anderson says, “I’m more pleased with the sound of this record than I have been in a long time.”

The first single, “I Work a Lot Better” will be shipped to radio on May 11 and will be available for download on iTunes, Amazon and other major digital retailers. The rocking mid-tempo track is in the style of previous chart-topping hits, such as “Money in the Bank.”

When asked about the single, Anderson stated, “It was actually Josh Turner's idea. He is a fine young man, a great talent and a real asset to modern day country music. Josh and I have written several songs together and it’s always a pleasure to write with him”.

Raised in Apopka, Fla., John Anderson grew up listening to both rock and traditional country. In the end, Anderson resisted the call of rock ‘n roll and chose to pursue his country music dreams, and is recognized as one of the greatest country singers to ever step up to the microphone and possesses one of the most instantly identifiable vocal instruments in the history of the genre.

In 1977, Anderson signed with Warner Brothers Records and had his first major hit in 1980 with Billy Joe Shaver’s, “I’m Just an Old Chunk of Coal (But I’m Gonna Be a Diamond Someday).” Other hits include the classic “Wild and Blue” released in 1982, and “Swingin,” the No. 1 Billboard Country single co-written with Lionel Delmore that would lead Anderson to garner the CMA Horizon Award.

Throughout his career, Anderson has produced 23 albums and released more than 60 singles (26 of which charted in the Top 10). He was inducted into the Nashville Songwriters Hall of Fame on October 5, 2014, and holds a wealth of industry awards including Academy of Country Music Career Achievement Award.

When asked about his upcoming album Goldmine, Anderson remarked, “I'm really proud of this album. At this point, it’s just for me and the fans. A best case scenario for me is if the fans that have loved our music and supported us for so many years know Goldmine is out there, and how to get it, I’ll be happy.”

Anderson is currently touring heavily throughout the United States. For a complete list of upcoming tour dates, please visit JohnAnderson.com/tour.

Most recently, Anderson collaborated with Keith Urban for the taping of “ACM Presents: Superstar Duets,” a CBS special featuring Country music luminaries and chart-topping artists. The two-hour event will air on Friday, May 15. On July 25, he will join Keith Urban again for a performance at Cheyenne Frontier Days in Cheyenne, WY.