For 20 years Deep South Entertainment has been producing concerts, managing artists, and providing live and local entertainment throughout the Triangle and beyond. 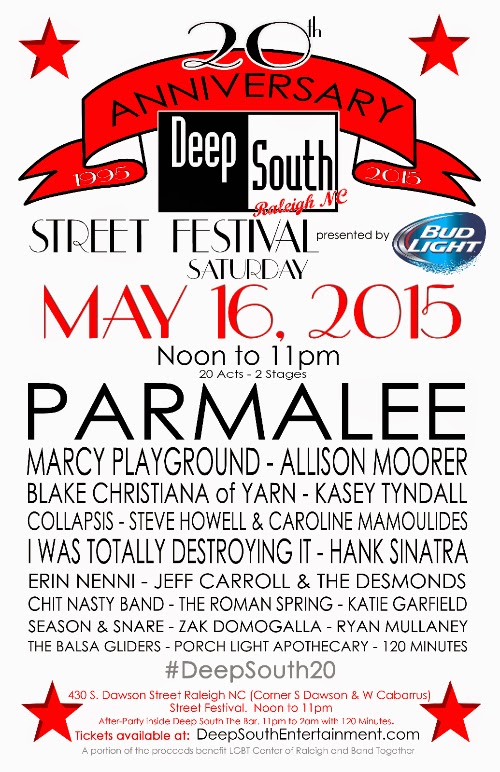 Yes, it’s been 20 years since Deep South first began as a record label operating out of a downtown Raleigh apartment. Fortunately, time has only allowed them to grow, largely due to the constant support and shared passion for music and the arts from a community of business partners, gifted musicians, and so many great friends and allies.

And with that, in honor of their 20th Anniversary, it is time to celebrate with Deep South’s biggest event to date:

Located on the corner of South Dawson St. and West Cabarrus St., we’ll be taking over downtown Raleigh for a music festival suited for anyone and everyone. Celebrating 20 years with 20 acts and 2 stages, #DeepSouth20 will feature performances by bands and solo artists that have been a part of our 20 year history.

With an indoor stage and an outdoor stage, we’re bringing you the best of both worlds. Enjoy intimate acoustic sets inside Deep South the Bar AND get your outdoor concert fix with our main stage featuring some of the biggest acts we’ve ever had the pleasure to work with and call friends. With Deep South client and Top 40 country music sensation Parmalee as the headliner, the festival can only promise good times, good vibes, and to feel like Carolina.

Tickets are available now at DeepSouthEntertainment.com

A portion of the proceeds will benefit Band Together NC and The LGBT Center of Raleigh.

Join us Saturday May 16, 2015 at 430 S. Dawson Street Raleigh, NC (Corner of S Dawson & W Cabarrus) for Deep South’s 20th Anniversary Street Festival from Noon to 11pm. The fun continues at the after-party inside Deep South the Bar with 90s cover band 120 Minutes from 11pm-2am.