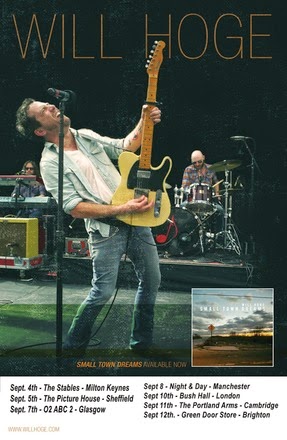 Nashville, TN (April 14, 2015) – Critically acclaimed singer/songwriter Will Hoge is making his first-ever full band trek to the United Kingdom for seven headline tour dates across Scotland and England, beginning in September. Touring in support of his newest album SMALL TOWN DREAMS, the project is already garnering rave reviews and launched into the Top 5 on iTunes Country Albums chart. SMALL TOWN DREAMS is available now in the US and slated to be released to fans in the UK on June 15.

Media critics and fans alike have been buzzing about the exciting new release of SMALL TOWN DREAMS with ROLLING STONE COUNTRY lauding the 10th studio album as one that "breaks down country doors…most satisfying album yet" and CMT calling it a "masterful piece of work that takes the simple beauty of everyday life and delivers it to the listener in a way we’ve never heard it before." Taking note of Hoge's real-life storytelling, MILWAUKEE JOURNAL SENTINEL praises Hoge's style and craft, "plenty of country stars have tried to emulate the blue-collar ethos of the likes of Bruce Springsteen. It takes real grind-it-out living to capture the experience, and few in the modern Nashville realm have done so as successfully as Will Hoge.”

For years, I’ve wanted to bring the band over and play full shows in the UK. I'm excited now for folks to see the live show and hear the new album,” says Hoge.

The UK edition of the tour will make its first appearance at The Stables in Milton Keynes on September 4 and continue to stop at venues including the O2 ABC 2 in Glasgow, Bush Hall in London and more.

Posted by LovinLyrics at 7:24 PM