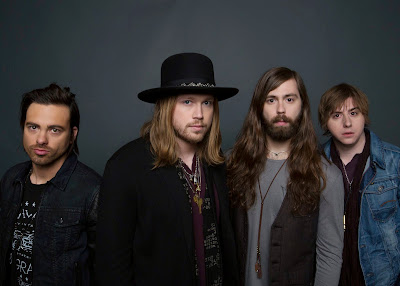 NASHVILLE, Tenn. – (May 5, 2015) – “Smoke” keeps rising for breakout country rockers A Thousand Horses, making them the first and only new act of 2015 to break Top 5 at Country radio, and it’s still climbing after only 14 weeks since their record-breaking debut at No. 28.

The Republic Nashville band’s record-setting debut single has reached the Top 5 on the Mediabase country songs chart today and is poised to achieve that status on Billboard’s Country Airplay and Hot Country Songs charts as well after storming out of the gates.

The news comes as A Thousand Horses prepares for a breakout series of appearances over the next six weeks in the run up to the release of debut album Southernality on June 9. The Nashville quartet consisting of frontman Michael Hobby, guitarists Zach Brown and Bill Satcher, and bassist Graham DeLoach, with a five-piece rollicking backing band including a three-piece harmony section, will make their first appearance and morning television performance on NBC’s The Today Show on May 11 and will visit Fox & Friends on May 13 before joining Darius Rucker and Brett Eldredge to kick-off the Southern Style Tour on May 14 in Holmdel, N.J.

“To know this band’s journey and the side-jobs we all had, the gigs we took for no money, the memories we made while all traveling in one van while we took turns driving overnight for years just to get our sound perfected and the music right, just makes this moment so incredible,” Hobby reflected. “We are incredibly humbled by Country radio’s response and the fans’ enthusiasm, and we just want to take a moment to let this all soak in.”

Just like “Smoke,” a song about a love interest whose presence lingers even when she’s not around, A Thousand Horses leave their listeners eager for more.

Fans who want more of the band right now can pre-order the Dave Cobb-produced Southernality on iTunes to immediately receive five songs. And there will be plenty of opportunities to see A Thousand Horses will also appear at the CMA Music Festival in June in Nashville, one of a handful of select festival appearances.